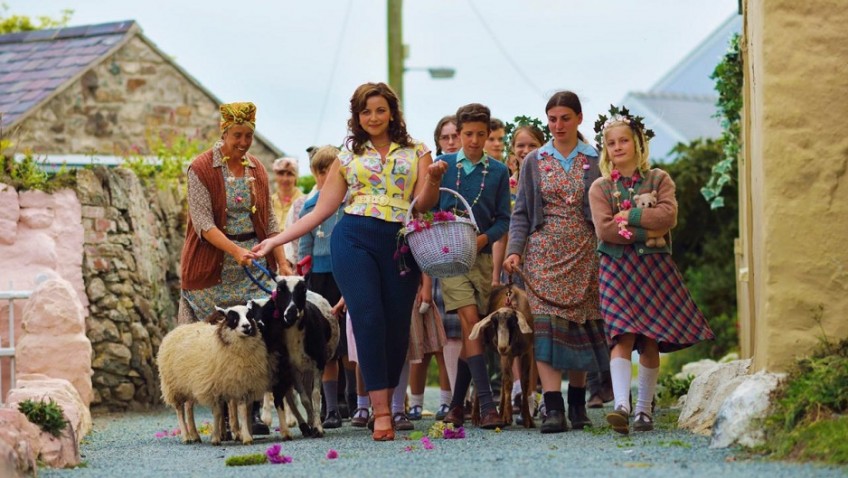 An ambitious adaptation of Dylan Thomas’ radio play is best appreciated with your eyes closed.

Dylan Thomas’s Under Milk Wood, a fond, but satirised day-in-the-life of the inhabitants of a Welsh fishing village, was commissioned as a radio play for the BBC in 1954 to feature the melodious voice of Richard Burton. It was not until 18 years later that Andrew Sinclair, a biographer of Thomas, scored a coup by uniting Richard Burton, Liz Taylor and Peter O’Toole for a cinema adaptation.

Whether or not the world needs another cinema adaptation of Thomas’s radio play will be determined by Kevin Allen’s new, bawdy 87-minute-version, entitled Under Milk Wood.  Allen tries very hard, but he fails to persuade us that ‘a play for voices’ crammed full of Thomas’s trademark poetic aural imagery is enhanced by the film’s superimposed visualisation.

Wait a minute, some might be objecting: is this the Kevin Allen who wrote and directed Twin Town, a portrait of life in Swansea that saw two sadistic, drug-fuelled, criminals tarnish the image of Thomas’s sheep-white Wales? Yes, the same, and he has transported the stars of Twin Town, Rhys Ifans and his brother, Llyr Ifans into the land of Milk Wood, as if to suggest that Dylan Thomas, too, knew a thing or two about how to blacken a town.

Elizabeth Taylor was surely a token marquee name, more to look at than to listen to, but it is hard to imagine anyone trying to replace the voices of Burton (First Voice) and O’Toole (Captain Cat). Allen seems a little less interested in voices than in illustrating the text with ghoulish imagery, bawdy sex, props and scenery, presumably to make the radio play more cinematic and relevant.

Narrator/Captain Cat Rhys Ifans has the Welsh accent, and if his voice lacks Burton’s musicality, it conveys the out-of-body rambling of a lost soul grappling with the ghosts of his past.  Captain Cat (Ifans) has recurrent dreams about drowned, barnacled shipmates and about Rosie Probert (Crisian Emanuel), his deceased lover. Most of Thomas’s colourfully-named characters are unfulfilled and haunted by death and longing; expressing themselves in interior monologues or in dreams of deadly and lusty deeds.

Allen, supported by co-adapter Murray Lachlan Young, another Welsh poet, turn these feelings into a series of random earthy scenes unconnected by anything as viewer-friendly as a narrative. Thomas meant the play to be humorously irreverent (Llareggub, the small fishing village that is the setting of the poem, is ‘bugger all’ spelt backwards), but here we get Nazi fetishisms, S & M and the lurid sounds of bristly men groping overweight women in the night.

Along with the storybook, 1950’s seaside  setting, signs of rust, ageing and putrification abound.  The ghoulish reveries of Captain Cat are echoed in the plaintiff chanting of Polly Garter (a luminous Charlotte Church) remembering one of her lovers who is ‘dead, dead, dead.’  Intentionally or not, this feels like a very sunny Shaun of the Dead, with a relentless crowd of over-lit, over-costumed and nightmarish villagers parading down the High Street.

One of the early treats in the film is the lovely choral singing over the opening titles, and a nicely directed song by Church as Polly Garter, a baby-obsessed young mother who also sings of lost loves.  As her name suggests, Mrs Organ Morgan (Aneurin Hughes) is obsessed with music – or is it an ‘organ’?  ‘Praise the Lord,’ exalts Rev Eli Jenkins, ‘we are a musical nation!’  But it is the musicality of the poem that trumps anything Allen adds.

We are treated early on to Thomas’s vivid description of a ‘Starless and bible-black night…and… ‘a slow, black, crow-black fishing boat-bobbing sea.’   Those alliterations, as relentless as the Welsh waves lapping at Llareggub; those hyphenated adjectives, the use of neologism, hypotaxis, hypallage and a myriad of poetic techniques, evoke a world that can only clash with anything Allen dishes out to illustrate (and with jarring literal-mindedness) what we are seeing in our mind’s-eye.

So while the film nearly blinds us with salty seascapes and cottages crammed with the entire prop department of BBC Wales, Under Milk Wood is a battleground in which the visualisation of Thomas’s imagery fights it out with the dominance of what is before us on the screen.   When the ratio of characters to plot is so great, and the aural and visual language so rich, Allen’s superimposed visualisation leaves you reeling – or simply tuning out.