Home / LIFESTYLE / REVIEWS > / FILM REVIEWS / A star is born in this uneven, but remarkable film about dance and identity. 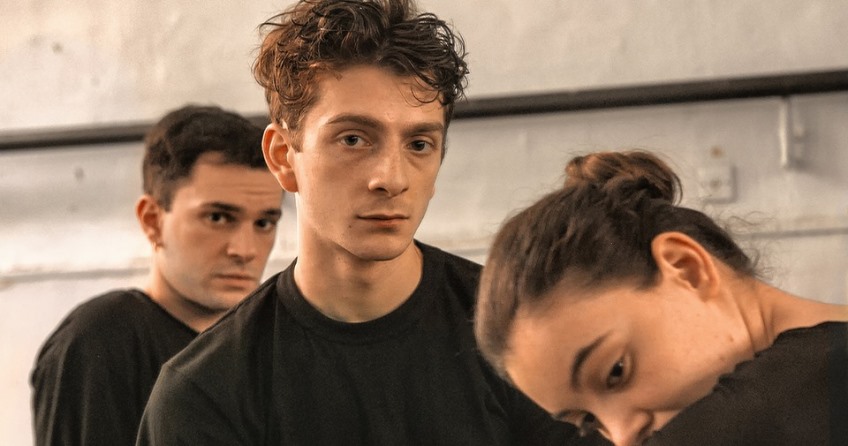 A star is born in this uneven, but remarkable film about dance and identity.

The Republic of Georgia broke away from the Soviet Union in 1991, passed legislation prohibiting discrimination on the basis of sexual orientation and elected a westward-looking, former French diplomat as the country’s first female President. But as Swedish-Georgian writer-director Levan Akin’s mostly wonderful, gay coming-of-age story shows, old taboos, the repressive, intolerant arm of neighbouring Russia and the resurgent Orthodox Church are very much in evidence. It is indicative of the attitude toward homosexuality that in the credits, special thanks is given “to the choreographer whose name cannot be mentioned but without whose help this film would not have been made.”

If this intolerance, fortified by tradition, influenced the production, it is the main source of tension in the story of Merab (Levan Gelbakhiani) who has been training since childhood at the National Georgian Ensemble’s Academy with his dance partner Mary (Ana Javakhishvili) and his older brother David (Girogi Tsereteli).

Georgian dance, associated with a macho nationalism, is such an integral part of the culture that all Georgian children take dance lessons from an early age and there is no shortage of men competing to enter the National Academy. Dance is all that Merab knows, and both his parents (now separated) were professional dancers, as was his grandmother. The brothers share a modest flat with their mother and grandmother, and since making ends meet is as much a problem as family pride, Merab is berated for bringing leftovers home from the restaurant where he works for fear that a nosy neighbour will spread rumours.

Despite Merab’s credentials and dedication, his teacher, Aleko (Kakha Gogidze) has it out for him. He criticises Merab for being too soft and expressive, reminding him that, ‘there is no sex in Georgian dance!’ Merab’s status in the company is not helped by David’s conduct. He goes out drinking at night, cannot hold down a job and is threatened with expulsion for missing too many classes.

Nonetheless Merab’s life revolves around the Academy and his fellow students. They form a close-knit community, to the extent that Mary and Merab are seen as girlfriend and boyfriend, although Merab does not reciprocate her romantic feelings. If part of Merab feels like an outsider, the Academy offers a support network and a ready-made social life. In a bit of foreshadowing there is talk of a student being kicked out for his sexual conduct and when Mary suspects that her rival is another boy, she fears for his safety, although her warnings fall on deaf ears.

All the students are focusing on the upcoming audition to gain admittance to the professional Ensemble. The competition is fierce, so when a new student, Irakli (Bachi Valishvili), arrives from the provinces, Merab finds himself in an emotional quandary. He cannot take his eyes off Irakli, and not just when he is dancing. If Irakli is Merab’s chief rival, the mischievous, cool outsider who doesn’t give a toss about the rules, is also the object of his desire.

When Mary invites the class to her overnight birthday party at her parents’ country house, she is hoping that they will sleep together, but realises that she has lost Mareb to Irakli. The young men’s first tryst in the woods behind the house is awkward, but on the second night they make love with commitment and tenderness.

Elated at his first sexual encounter, Merab dons a white, floppy hat and, shirtless, performs a seductive dance to the Swedish singer Robyn’s song, Honey, feeling its provocative line, “Baby, I have what you want, come get your honey”. It is as if Mareb wants to defy Aleko and put sex into Georgian dancing, a foreshadowing of the grand finale. And as though in contrast to Mareb’s optimism about his new relationship with Irakli, after dinner, a group of men begin singing Tsinkharo, a beautiful, traditional folksong about unrequited love.

Sacrosanct in today’s Georgia and intrinsic to its national identify are the Church, the traditional polyphonic singing and the traditional macho national dance that is rooted in military moves and Middle Age holiday celebrations. Merab has never questioned the status quo until, devasted by Irakli’s sudden departure, he goes off the rails, but re-emerges, asserting his identity through a seditious dance audition.

Although Akin is of Georgian descent, and spent summers there, he had never shot in Georgia before and was shocked to witness homophobic attacks as he based his constantly evolving script on real stories he gathered in underground gay hangouts around the city. The shooting schedule was frequently interrupted and access to the locations often depended on a homogenised description of the script.

This uncertainty enhances the spontaneity, fluidity and the subversive element of the film which belies its Flash Dance meets Dirty Dancing plot, right down to the defiant dance number at the end. The film is let down by several underwritten and clichéd characters including all the female characters, and some uneven performances, in particular, Giorgi Tsereteli’s David and Bachi Valishvili’s Irakli.

But the film is redeemed by some impressive camera work by Berlin-based cinematographer Lisabi Fridell, and an incredible performance from the charismatic first-time actor and professional dancer, Levan Gelbakhiani, whose heartfelt and nuanced performance takes the film to another level. And then there are the film’s little surprises, like a late knock-out scene between Merab and David that takes your breath away.