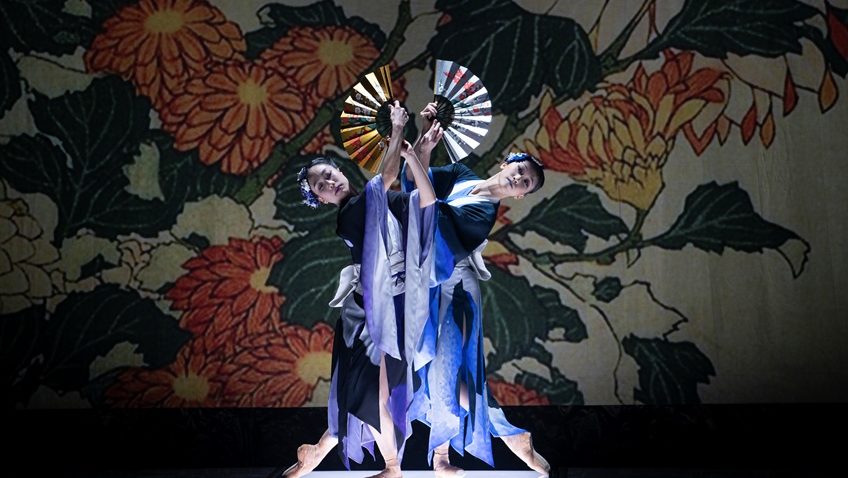 Following its tenderly poignant, breathtaking ending, the world premiere of Geisha brought cheers and ovations all round. With fabulous elements reminiscent of the company’s heartrending, truly magnificent Madame Butterfly, there’s so much to praise.

Choreographer Kenneth Tindall, longstanding member of the company as both principal dancer and choreographer, took on the commission with great relish. A firm advocate of strong storytelling through the drama and emotion of dance, Kenny had fallen in love with Japan when he lived there, so eagerly set his story in the exotic Eastern world of nineteenth century geisha.

Together with celebrated historian/author Lesley Downer and librettist Gwyneth Hughes, he built his story and characters around legendary Japanese heroine, Okichi, a geisha from Shimoda. A geisha’s duty, as she trains and hones her expertise in the arts of music-making, song and dance, is to serve and please men as a charming, demure, sophisticated, witty entertainer. When Okichi was rejected, thereby failing in her duty of service, overcome by shame and humiliation, she killed herself. Into the tale come sturdy samurai and, at a time Japan was starting to open its borders to foreigners after being closed for two hundred years, Americans, and then …ghosts. In a spooky yet gentle, subtle, moving ghost story the ethereal spirit of dead heroine Okichi is beautifully interwoven into the Japanese festival of Obon, a festival that welcomes home the spirits of the dead each year.

Alexandra Harwood’s score is amazing. Experienced in classical and film music, she, too, is an enthusiastic storyteller. Mixes, blends and contrasts in textures and styles of East and West ensure an exciting flow of musical treats throughout, while the super skills of the Northern Ballet Sinfonia and guest musicians do full justice to the wide-ranging score in evoking changes and turns in mood, emotion and plot. Superb Japanese sounds are created – yet without Japanese instruments: the hearty excitement of taiko drumming, hints of koto and shamisen, the clipped clicks of kabuki theatre, and, courtesy of an alto flute, the bending notes of a shakuhachi. Subtle military drum and brass hail the US arrivals while hosts of strings build up drama movie-style but without going over the top. Different instruments deliver frequent treats – gentle, warm cello, plaintive oboe, rich, round bassoon, tender toned harp, deep throbbing trombone or pulsing percussion. The elegant sweeps, athletic angles, superb ballet skills and expressive interactions of the dancers work closely with the music in enacting this emotional tale and its portrayals of love and friendship, loss and rejection, vengeance and forgiveness, loneliness and joy.

Spectacles of amazing backdrops, beautiful costumes, stunning effects and all round loveliness are Northern Ballet’s forte. Delicious visual feasts come from grey, swirling waters where fishermen fish, from tall, shifting Japanese screens, from golden opulence, patterned kimonos and fans, from ambulant trees, an “ah” factor to and from softly falling snow. Most breathtaking of all is the eerie wilderness underworld of the dead in the very moving second act. Ethereal figures and silhouettes appear against electric blue mists and fiery bursts, faded souls, long-haired and clad silver-grey, writhing and floating. Foremost amongst them is Okichi, lost, despairing, lonely. As this world blends into the earthly world at Obon, beautiful lanterns dance, row upon golden row, before the dark shapes of tombs. Full of desolation dances Okichi, her ghostly, dark eyes, huge against her faded greyness.

Minju Kang and Sarah Kung are splendid as Okichi and Aiko. In light, stripy kimono, lithe, lovely and tremendously expressive, the pair dance together at the outset in warm, sisterly friendship, full of bubbling, giggling joy, their tender feelings choreographed in wonderfully engaging palm to palm touches. Later a spookily engrossing dance takes place as dead soul Okimichi uses her supernatural powers to take control of sturdy samurai Takeda’s actions and movements (beautifully danced by Riku Ito) yet without quite touching him. There are magic moments, too, as when Aiko dances with fresh-faced, eager young American, Henry, danced by Joseph Taylor in stripy-sided tights and double-button top, while similarly expressive, evocative solos and pas de deux flow throughout. In her retirement year, Hannah Bateman is stately, proud and elegant in her more elaborate kimono as the no-nonsense Geisha Mother, while all the ensemble performances of fishermen, geisha, samurai, young Americans and dead souls are as pleasingly choreographed and engaging as the rest.

This is a beautiful, poignant tragedy, vividly and splendidly brought to life (and death) all round.

GEISHA is/was due to be performed in Sheffield, London Sadlers Wells, Edinburgh and Cardiff.