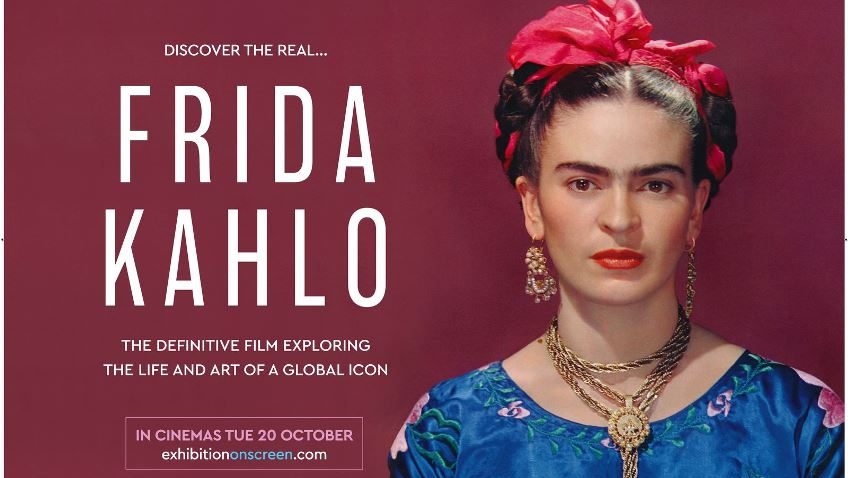 A fascinating documentary examining the links between Frida Kahlo’s life and art.

In 1923 Diego Rivera, one of the founders of the Mexican Mural Movement, was at age 37, on the crest of the fame, fortune and (despite being obese with a bullfrog face) dalliances with female fans that continued until his death in 1957. In 1923, Frida Kahlo, aged 16 and from a bourgeois family, was one of the first women admitted to the National Preparatory School, where she aimed to study medicine. This is ironic for her life would be characterised by pain – dealt with through art, drugs, alcohol and operations. In her youth, painting was a hobby, inherited from her adoring and adored father, a German immigrant, a respected photographer who dabbled in paint. Then two events occurred which were responsible for all the pain in Kahlo’s short life: an almost fatal bus accident and her marriage to the womanizing Rivera. These events changed the course of art history, for today most people have heard of Frida Kahlo but might struggle to place Rivera.

Released earlier this year, this fascinating and comprehensive documentary narrated by Anna Chancellor and directed by Ali Ray is about the interconnection between the life and art of Frida Kahlo. It is enriched by commentaries by the typically high calibre roster of experts that characterises Exhibition on Screen and enhanced by captions identifying the key paintings and where they are located. The experts include directors from the various major Kahlo collections: her lifelong home (built by her father), La Casa Azul; the Anahuacalli Museum, the Dolores Olmedo Museum and the Museum of Modern Art, all in Mexico City.

T.S. Elliot warned against using biography to interpret art, but in the case of Kahlo the two are so linked, that the excellent summary of her life and the analyses of her major works in the film are key to a full understanding of the artist and her place in history. The links, well covered in the film, are too abundant to mention in a review, however, arguably the most important occurred on September 17, 1925.

On this day, Frida was involved in a serious bus accident between her home in the affluent Mexico City suburb of Coyoacán and her school. She was left her with a broken spinal column, a broken collarbone, broken ribs, a broken pelvis, and 11 fractures in her right leg. Her right foot was crushed, which only aggravated the Polio that had already affected her legs, self-esteem and female identity when she was 6. At 18, she underwent the first of 30 major operations in her lifetime.

Her father (a German of Hungarian Jewish ancestry) and her mother (of Mexican Indian and Spanish descent), encouraged Frida to use her long recovery period to paint. They transformed her bed into a studio with a mirror: perfect for the myriad of ever-evolving self-portraits that were to dominate her career and in her words, ‘to express what I could not otherwise put into words.’

Then the second major link. On August 21, 1929, Kahlo married Rivera, whom she first encountered when he painted a mural at the National Preparatory School in 1922 and was introduced to in 1923. Her mother saw the marriage as “the union of an elephant and a dove”. Her father, inundated with medical bills and having lost his government photography commission in the same 1910 Revolution that Frida identified with, welcomed Rivera’s money. Moreover, whereas Frida’s boyfriend from school abandoned the invalid and the prospect of life as a carer, Rivera, already twice married and not intending to remain faithful, was less intimidated. He was captivated by Frida’s talent, which he recognised and encouraged, and by her interest in Mexican artefacts and politics, which he shared (her short affair with Leon Trotsky aside). Both partners in this unholy alliance had numerous affairs (Kahlo with men and women), although Kahlo remained devoted to Diego until the end.

Another essential biographical point is that in 1928 Frida, who already identified herself with the resurgence of the Mexican national identity that transformed the country after the change of government in 1910, joined the Communist Party. A wedding portrait shows her in a typical servants’ dress, smoking a cigarette.

The transformation from her Italian Renaissance influenced Self-Portrait in a Velvet Dress with her Modigliani neck, from 1926, and her naïve style wedding painting, Frida Kahlo and Diego Rivera from 1931, marks the first major shift in her style. This painting may have been based on her father’s wedding photograph and shows the physical differences that so marked the odd couple. But more importantly, Kahlo paints herself as a folkloric artefact (in the words of Angela Carter) and submissive wife holding Diego’s hand, while Rivera is identified as a painter, holding a palette.

In a fascinating manner the film traces the evolution of Kahlo’s rare depiction of a palette from its first appearance in Rivera’s hand. After she miscarried in Detroit where she accompanied Rivera on a mural commission, she did her first and only lithograph called The Abortion. It shows her failure as a mother through the left side of her body with the journey of her foetus, and the emergence of the artist with fertility images of another kind on the right side. This side includes the growth of a third arm, holding a palette. The third and final depiction of a palette is three years before her death, after a period of multiple operations that left her in a wheelchair. In Self-Portrait with the Portrait of Dr Ferill from 1951, she holds a palette in the form of a heart, and her paint brushes are dripping with blood.

Two more stylistic changes receive due commentary. Her small, complex and allegorical paintings from the 1930s were influenced by the distinctly Mexican Retablo (behind the alter) tradition. These are naïve and colourful votive paintings (or laminas) offered in thanks for divine intervention and usually painted on tin. Her most famous, and perhaps the single painting that turned Kahlo into a modern feminist icon, is The Henry Ford Hospital, Detroit. Paintings of a nude woman lying on a bed is an accepted tradition from the Renaissance on, but here Kahlo paints herself naked, not nude, and not as an object of desire, but a woman agonizing in a hospital where, for the first time in art history, the scene is not a birth, but a miscarriage. And for the first time in the history of art (and the only time until Tracey Emin), vaginal blood covers the sheets.

The next stylistic development, from the 1940s, is her heavily symbolic and surrealist (although she rejected the label) influenced paintings. The spiritual, The Love Embrace of the Universe, The Earth (Mexico), Myself, Diego and Señor Xolotl from 1949 receive an in-depth analysis, as does the tragic 1949, The Broken Column.

More commentary about the role of Kahlo’s ever-changing hair styles to express emotion, and of her ambiguous politics would have been interesting. A professed Communist, she maintained two large, stylish homes while her 1950’s self-portrait with Stalin is alarming. But also omitted is that Kahlo was the first 20th century Mexican artist to enter into The Louvre and during her life she enjoyed some of the recognition and acclaim that has risen steadily in the last quarter century.

In the spring of 1953 Frida had her first one-person exhibition in Mexico. Although Kahlo was carried into her exhibition on a hospital stretcher – the exhibition was a huge success.

During the same year as her exhibition, Frida had to have her right leg amputated below the knee due to a gangrene infection and she died on July 3, 1954. The last words in her diary read “I hope exit is joyful and I hope never to come back.”

After her death in 1954, Kahlo was regarded as a marginal figure. Since then, her fame has steadily risen. In 1977, the first of her pictures sold at auction fetched $19,000 but by 1995 a self-portrait brought in $3.2 million, the highest sum ever for a painting from South America.