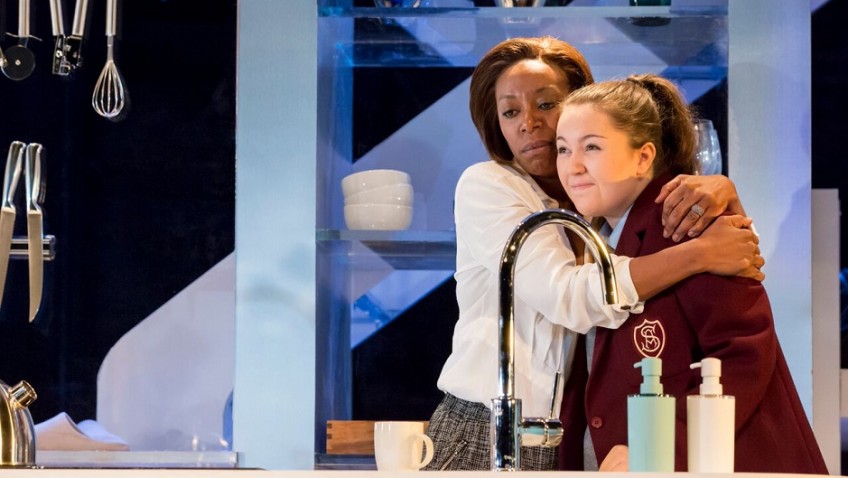 Penelope Skinner’s play is about women getting to 50 and being under-represented and marginalised and feeling ignored, invisible and irrelevant.

It’s a rallying cry to women to refuse to be defined by their age and outward appearance.

Kim Cattrall was rehearsing Linda, the leading role when, just days before the opening night, she was advised by her doctors to withdraw from the production.

Noma Dumezweni bravely stepped into the breach. The press night was not cancelled and ten days later she was performing to the critics.

Linda is a huge role and the audience was advised that there might be moments when she would have to refer to the script.

Dumezweni gave a terrific performance throughout and only very occasionally had to refer to the script.

Linda is the marketing boss of a cosmetics corporation and she has been very much part of its commercial success. She wants to introduce an anti-ageing cream for elderly women. She is overruled by her boss and board.

Linda is 55 and having a bad time.

Her boss (Ian Redford) has just appointed a 25-year-old (Amy Beth Hayes) in her place. Her 54-year-old husband (Dominic Mafham) is cheating on her with a 27-year-old singer (Merriel Plummer).

Her eldest daughter (Karla Crome, particularly striking) is a 25-year-old, who wears a skunk-suit and hasn’t got a job. Her youngest daughter (Imogen Byron), 15, wants to be an actress and thinks doing King Lear’s storm soliloquy would be good idea for an audition piece.

Designer Es Devlin gives the play an amazing two-tier, revolving, glistening swan-like set and Director Michael Longhurst and is not afraid to meet the final unlikely melodrama head on with a theatrical flourish.