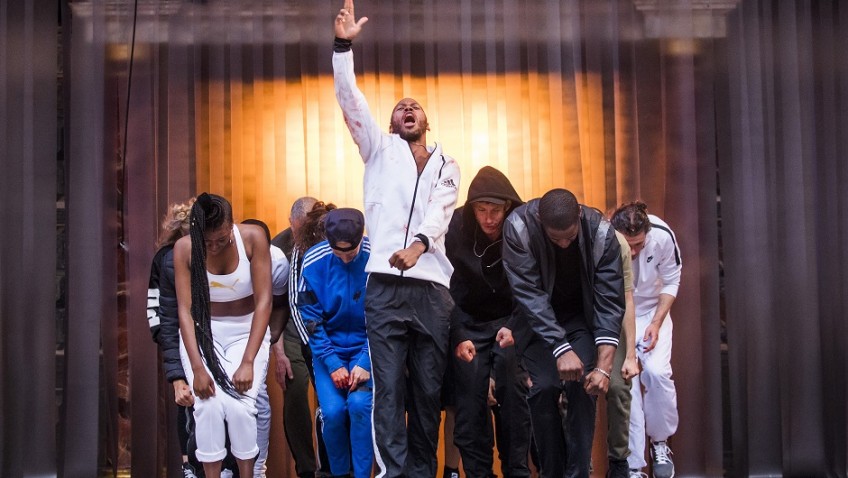 Cymbeline is the King who plays a minor role. Imogen is the star turn in this convoluted, implausible, highly artificial story, which Shakespeare borrowed from Boccaccio and Holinshed.

The stage is peopled with Brits, Celts and Romans and the action takes place in Ancient Britain at the time of the birth of Christ.

Cymbeline has never been popular with modern audiences. The Victorians, however, loved it and idolized Imogen.

Alfred, Lord Tennyson read the play on his deathbed and arranged for a copy to be buried with him. Algernon Charles Swinburne said Imogen was “the immortal godhead of womanhood.” Imogen was Ellen Terry’s favourite role. Perhaps, one way to stage the play would be to give Shakespeare’s late romance the full pre-Raphaelite treatment.

Giacomo (Matthew Needham) bets Posthumus (Ira Mandela Siobhan) he can seduce his wife Imogen (Maddy Hill). He gains entrance to her bedroom when she is fast asleep and takes an inventory of the room and of her body. He then relays the information to Posthumous who is instantly convinced his wife has been unfaithful.

I doubt very much if Alfred Lord Tennyson would have asked for a copy of Cymbeline to be buried with him, if his knowledge of the play been restricted to Matthew Dunster’s modern, urban, aggressive, drug-ridden and tracksuits/trainer production with its modern colloquialisms, its abattoir curtains and its SF aerial battles with the actors in harnesses.

The play’s most famous song, “Fear No More the Heat o the Sun” has been cut. Maddy Hill (who gets a big laugh when she wakes to find a headless man in her bed) also gets to sing Daft Punk’s “Get Lucky’.

The most affecting performance is by deaf actor William Grint who speaks Arviragus’ dialogue in sign language which is translated by his dad (reliable Martin Marquez) who grows cannabis in his Welsh greenhouse.

The grime dancing finale, judging by the audience’s wild reaction during and after it, was the high spot of the performance and this leads to the big question of whether Shakespeare’s Globe Theatre is the right place for a production which is so at odds with the Globe’s raison d’être.