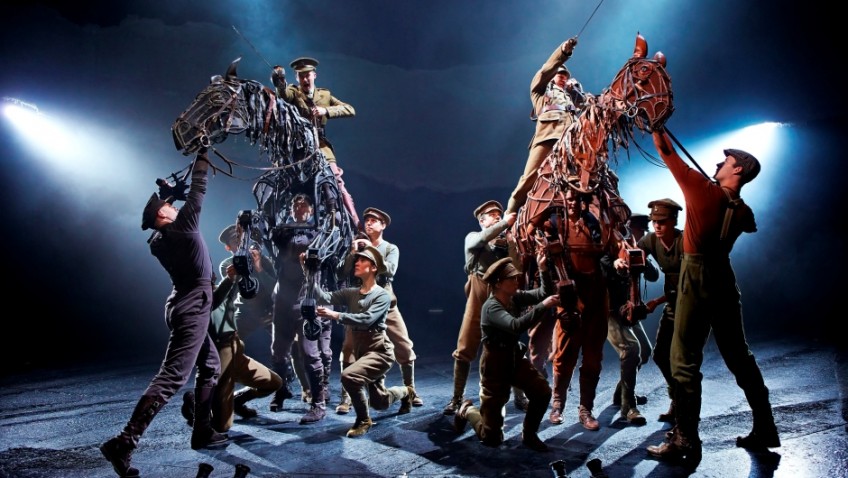 The opening scene transports you to the Devon countryside where we meet Albert and a young hunter foal that he names Joey. The ones that follow unfold the powerful story of the incredible bond which is forged between the man and the beast, the circumstances that lead them both to war, their own separate but equally harrowing experiences of WW1 and the love which drives Albert on to find his beloved horse against all the odds.

The innovative visual backdrop cleverly depicts dates and scenery supporting and propelling the storyline. From rolling Devon hills in the first half to the horror of the trenches and no man’s land on the French battlefields in the second. Handspring Puppet Company bring ground breaking puppetry which are so life-like that you forget about the performers within, throughout they maintain constant movements and sounds that have you believing you are watching a real life equine being. The goose puppet brings some humour to a sometimes gruelling storyline.

It was a privilege to be part of the audience watching this record breaking, thought provoking production, feeling every emotion, it involves you totally and utterly in the terror of the First World War from a human and from a horse’s perspective.

These amazing, innocent beasts blindly and loyally followed their masters into the most horrific and harrowing conditions on the battlefields in France, being killed or worse maimed and often left to die a slow, horrible death.

As Michael Morpurgo himself wrote this “would be the horse’s eye view of the universal suffering of that dreadful war in which ten million people died and unknown millions of horses.”

An unmissable piece of theatre and one of the best I have seen!

War Horse is showing at the Bristol Hippodrome until Saturday 14th February 2015.