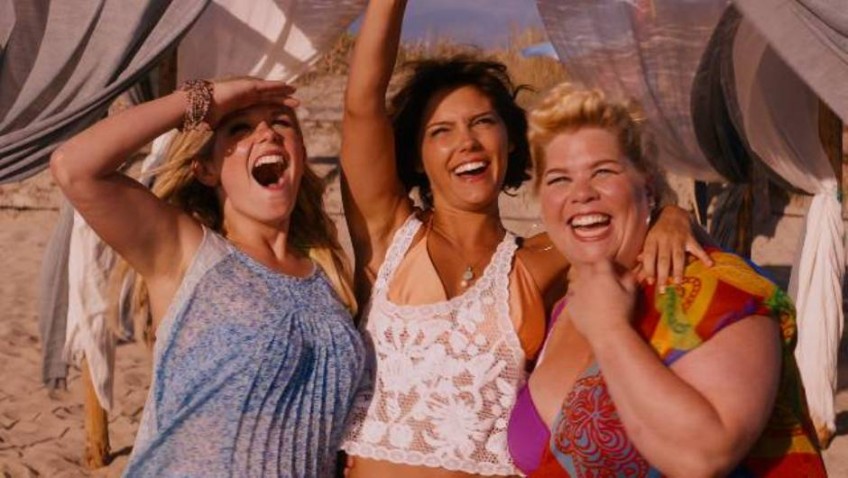 In Walking on Sunshine, Max Giwa and Dania Pasquini, creators of the Street Dance films, focus more on the singing than on dancing and have a go at adding characters and plot to their previous films. That the airhead characters and clichéd plot are equally paper-thin is not entirely offset by the beautiful Italian location shots and a soundtrack of popular 1980s songs.

Taylor (Hannah Arterton) returns to Puglia, Italy to celebrate the surprise marriage of her older sister, Maddie (Annabel Scholey, BBC’s Being Human), who is holidaying there on Taylor’s recommendation. If the orphaned sisters look nothing alike, their personalities are even more different.

Taylor left her true love, Italian stallion Raf (Giulio Berruti) behind after a summer holiday romance in Puglia in order to finish university. In contrast, wild child Maddie drops her playboy lover Doug (Greg Wise), for marriage to a man she’s only known for three weeks.  Of course, we know that Maddie’s boyfriend is none other than Raf, but by the time Raf and Taylor meet as future brother-sister-in-law, both lack the courage to tell Maddie and admit their real feelings.

If Walking on Sunshine were a real horror film, Raf would be a human mutant-decoy who plagues the beaches of Puglia ensnaring every pretty, curvaceous American tourist he encounters.  We never learn what he does for a living, but work is not something that preoccupies any of the fun-loving young people here, as opposed to other parts of the Western world.

The casting process must have been a hoot.  Max and Dania, as they are known, had to find pretty girls with good voices and great bodies to play the sisters and Arterton and Scholey fit the bill.  Bucking the trend that began with Les Misérables and continues with Jersey Boys, the singing was prerecorded and loses something in the process. The song numbers are performed with gusto, but are belted out in an artificial way.

The unfamiliar faces are mixed with more familiar ones, including X-Factor winner and multi-platinum singer/songwriter Leona Lewis, Greg Wise (Sense and Sensibility) and comedienne Katy Brand (Nanny PcPhee and the Bing Bang, TV and road show, Katy Brand’s Big Ass Show).  If Brand has the best lines, everything is relative, and no one is required to do much acting.

Just how Taylor made it through University is something we cannot worry about anymore than why, apart from his Alain Delon looks, she would want to marry Raf, a man incapable of making the most basic of decisions.  Why Maddie is fixated on Doug, a loser nearly 20-years her senior is never discussed although, to her credit, she does, literally, send him flying.

The star of the film is Puglia, which should see an increase in tourism, and the 1980’s hit parade.  The one-a-minute tunes include the title song (Katrina and the Waves), Madonna’s Holiday, the Human League’s Don’t You Want Me (Baby), Cindi Lauper’s Girls Just Wanna Have Fun, Whitney Houston’s How Will I know, Cher’s If I Could Turn Back Time and many more.