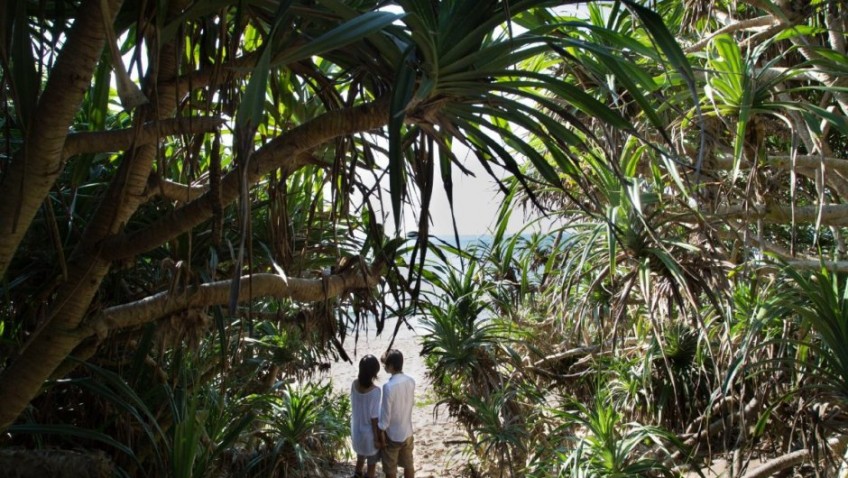 Romance after the storm

Still the Water is a Japanese coming-of-age romance set on Amami Oshima in the Amami archipelago. It is a place of such mystical harmony and tropical beauty that you are happy to forgive the simplistic and clichéd problems of the protagonists and the contrived nature of the drama.

Everyone on the island is bathed in a Zen-like aura, and the inhabitants’ problems, traumas and even a murder seem unimportant next to a 500 year old banyan tree and the towering waves. Director Naomi Kawase (Suzaku, The Mourning Forest) describes the film as her ‘masterpiece’ and it was selected to run in the main competition at 2014’s Cannes Film Festival. Despite the film’s mesmerising qualities and authenticity in the depiction of a traditional way of life, Still the Water falls short of that accolade.

The film begins with a scene of a violent storm on an island, with frightening waves. In the calm after the storm, a teenage boy finds a body floating face down near the water’s edge, his back covered in tattoos. The whole community talk about nothing but this mystery man, and whether it was suicide, an accident or murder. The film is no police procedural, however, and if we soon forget about the body, the young boy who finds it does not.

A pretty, 16-year-old girl, Kyoko (Jun Yoshinaga) is in love with the good-looking boy, Kaito (Nijiro Murakami) who finds the body. If he does not respond to the girl’s enthusiasm, he spends his free time riding around their gorgeous island, Kyoko balancing precariously on the rear of the bike. Kyoko lives with her loving and fun-loving mother and father; adores swimming in the sea and wants to experience sex. Kaito lives with his divorced, working mother; is afraid of the sea and rejects Kyoto’s suggestion that they sleep together. As we gradually discover the reason for the Kaito’s depression, we also learn that Kyoko’s life is marked by tragedy, as her spiritual mother, a Shamon, is dying of cancer. The ‘plot’ of the film is how both teenagers overcome their person grief, learn to accept the cycle of life and human frailty, and strengthen their youthful relationship.

The mother’s protracted death leads to such dialogue as, ‘Why is it that people are born to die?’ eliciting Zen-like responses. This will bother you a lot less than the neat and tidy resolution to Kaito’s family problem and to the anti-climactic mystery of the dead body.

At the end, an old man at the beach tells Kyoko: “We old people don’t want to be a burden so we hold back. But whatever you want to do: do it. Whatever you want to say: say it. We old ones will pick up the pieces.” His speech, which continues, has a certain poetical wisdom to it, but is not one supported by the film in a meaningful way.