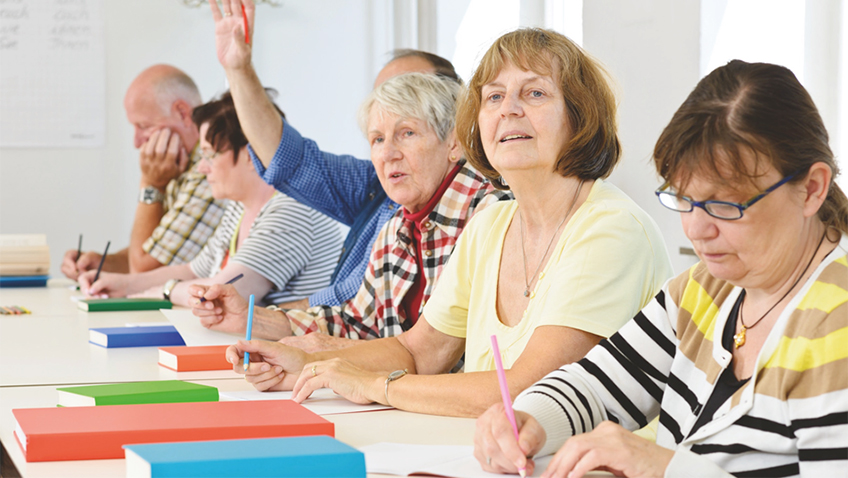 A 21st century approach to getting older: learn, laugh, live

Ageing is often associated with decline, dependency and loneliness; some would say that an acceptance of such stereotypes and a resignation that getting older is a time when life plateaux and degeneration kicks in, is embedded in our culture and our thinking.

While there will always be real challenges for some older people, such as physical and mental deterioration, loneliness and loss, changing our approach to ageing could be the key to combating these difficulties and to achieving good health, mental wellbeing and happiness long into old age.

The Office for National Statistics (ONS) reports that men aged 65, on average, are expected to live another 18.5 years and women another 20.9 years. In the 21st century, people are living longer, with better health care and more opportunities; old age is no longer a time to sit back and quietly decline, but is increasingly a time for transformation and renewal.

U3A call for a new approach

In recognition of this, the University of the Third Age (U3A) is calling for a new approach to the ageing debate in the UK and encouraging society to embrace ageing as an opportunity to learn, broaden horizons and live life to the full.

The report, entitled, Living Life, Extending Horizons, Challenging Conventions is based on the findings of a literature review, together with the results of a member survey and a series of focus groups around the country.

Sam Mauger, Chief Executive of the Third Age Trust (which supports U3As in the UK) said, “We think it is time to move away from the current public debate on ageing which is largely predicated on a deficit and dependency approach.

“The evidence from this research demonstrates the value of mutual aid and of reciprocity to confidence, self-esteem, and wellbeing.

“The U3A model is low-cost, defined by participants, and learner-led. It is not dependent on state funding; it has a life and existence of its own.

“More importantly this report demonstrates the value of communities of interest which are not defined by age, or by past experience, but instead are defined by the experiences still to be explored.”

U3A members reported major benefits to being part of the U3A learning model in terms of confidence, combatting loneliness, feeling supported in new communities, learning new skills and, perhaps most important of all, feeling valued and enjoying life.

The U3A report documents that, in the UK, around 10% of the population feel lonely all or most of the time and this has a significant impact on their quality of life. Over 41% of people over the age of 65 say they feel out of touch with modern life and 12% feel cut off altogether. U3A’s alternative approach to ageing aims to change that.

Kelvin Rushworth from Wooler U3A in Northumberland said, “After my wife died of a brain tumour, I began the next phase of my life. For me, adjusting to living alone in a new area had many challenges. There is no doubt that U3A provides a wonderful, welcoming learning network: kindred spirits and friends galore!”

The University of the Third Age movement began in 1982 as a lifelong learning concept based on skill sharing, mutuality and inclusion. Today, it is a movement of 420,000 older people.

There are currently 1,030 U3As in the country with more opening all the time. Each U3A is a charity in its own right and hosts hundreds of interest groups chosen and run by the members, for the members.

Subjects cover a wide range of areas including architecture, biology, yoga, zoology and everything in between. There are around 10,000 interest groups taking place in the UK every week.

Members learn subjects together. They choose the subject areas, the content and the pace. Each person contributes to the learning process and each contribution is equal in value and relevance.

Any member in a U3A can start an interest group.

U3A national chairman Pam Jones, who celebrated her 80th birthday this year, said, “Members often call U3A a life-saver. If their circumstances change with retirement or losing a loved one, it brought meaning and purpose to their life. U3A is a community and just a wonderful organisation.”

The time has come to smash those age-old stereotypes of ageing and embrace growing older in the 21st century; learn, laugh and live.