Home / LIFESTYLE / REVIEWS > / FILM REVIEWS / Some truly clever humour and belly laughs are all but wasted in a misjudged sequel with no heart. 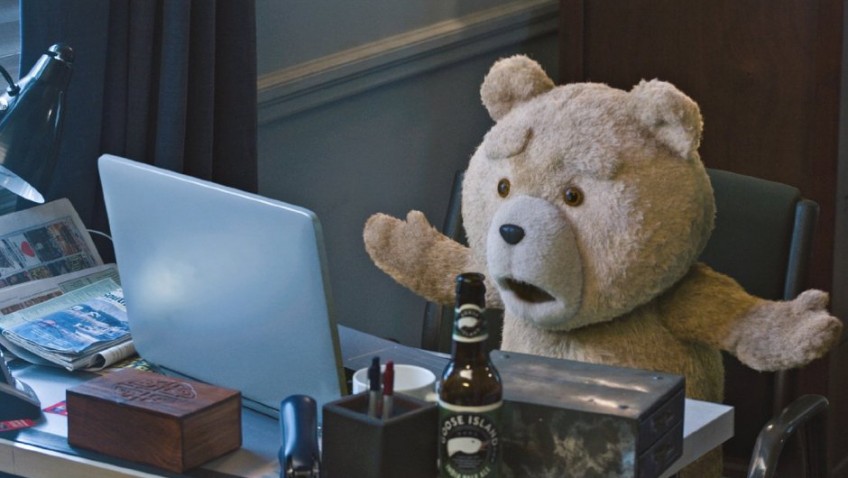 Some truly clever humour and belly laughs are all but wasted in a misjudged sequel with no heart.

When a movie, particularly one that stars its director and co-writer, is a financial success, it is a safe bet that a sequel will follow, whether or not we really need one. Granted, the premise of Seth MacFarlane’s 2012 hit Ted was a novelty from which some crude and vulgar humour could be milked for all it was worth. For John Bennett, a lonely Bostonian boy in 1985, a teddy bear becomes more than a childhood toy; Ted becomes working class John’s best – and only – friend and a celebrity to boot. So to please the fans of Ted, the foul-mouthed eponymous stuffed animal (the voice and motion capture of Seth MacFarlane) and the dim-witted, otherwise friendless, John Bennett (Wahlberg) are back for Ted 2.

Ted 2 is a lot funnier than MacFarlane’s, A Million Ways to Die in the West, but the clever jokes and gags we laugh at never really justify all the misfires and a plot that gets all sentimental and high minded about a bigoted, destructive and foul-mouthed teddy bear. The huge flow of good will injected into the film early on by a hilarious cameo from Liam Neeson soon dissipates.

John’s dependency on Ted has taken its toll on John’s marriage and his patient wife Lori has finally left him. Somewhere along the line John has lost his job, too, as we never see him working. Maybe welfare jokes are not fertile ground in the USA, but hasn’t MacFarlane missed a trick?

Ted, on the other hand, who was improbably promoted in the first film, gets married to his fellow supermarket check out colleague Tami-Lynn and the two set up house together. Some might find the marriage between a teddy bear with no sex organ and a tall, curvaceous, mentally-challenged woman to be funny; others might not be surprised to learn that their marriage is soon on the skids. The joke (MacFarlane is nothing if not in the know) is that like so many real marriages, Ted and Tami-Lynn are convinced that a baby is the solution. This form of social satire is compounded on two fronts. First, John and Ted go on an unorthodox quest for a sperm donor until John volunteers; and secondly, tests confirm that Tami-Lynn cannot conceive due to excessive drug use. If this does not look funny on the page, it is not made much funnier in the film.

The logical next step, adoption, introduces a new source of tension and potential humour, as Ted’s status as a human being is questioned for the first time in light of his plans to adopt a human child. Although Ted needs the best lawyer money can buy, they have to settle for newly qualified, marijuana- smoking lawyer Samantha Leslie Jackson (Amanda Seyfried). Movie buffs Ted and John instantly pick up on her name (Samuel L Jackson) for one of the least offensive ‘black’ jokes in the film. Far funnier is a hit on the stupidity of the protagonists when a conversation about author F. Scott Fitzgerald leads to a ‘Why did you say F***Scott Fitzgerald’ joke. Jokes based on films, including Jurassic Park, and even the search engine jokes are laugh-out-loud funny, but either go on past the point of humour or are just plain tasteless.

The second, more tedious, source of tension in the second half of the film is the reappearance of Donny (Giovanni Ribisi) Ted’s stalker and kidnapper in the original film. Donny, now the janitor at Hasbro Toys, convinces the CEO to go in on his plan to kidnap Ted and dissect him so that Hasbro can commercially reproduce the talking bear.   If you wonder why Hasbro allowed its name to be associated with this illegal activity, look closely at all the product placement.

Most of the film centres on a human rights case that becomes a cause celebre when Ted loses his job and has his marriage annulled over his non-human status. A top human rights litigator (Morgan Freeman) finally decides to accept the case after watching John risk his life to save his friend, Ted, on a news report. While the idea of making John’s romantic interest a lawyer might be a step in the right direction for the status of women in Ted 2, you will notice that she loses the case, and a male lawyer steps in with more success.

In court, the definition of a human boils down to ‘self awareness’ and ‘a capacity for empathy’.   The main problem with Ted 2 is that we are asked to root for Ted when he demonstrates about as much empathy to others as Mohammed Emwazi (AKA Jihadi John). MacFarlane could have attempted to turn this obvious irony into a satirical joke (on the court system or human rights laws, for instance), but instead, masks the hypocritical premise under a veneer of sentimentality.