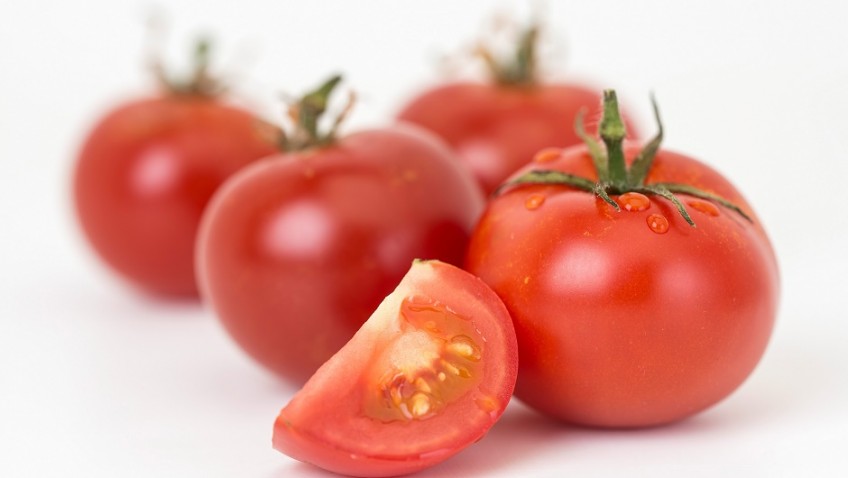 A ‘super tomato‘ packed with age-fighting compounds from red wine and cancer-busting properties of soya has been developed by scientists.

It packs in more life extending compounds than 50 bottles of wine and more of a compound that stopped cancers, such as breast cancer, than 2.5kg of tofu.

The compounds are phenylpropanoids like resveratrol and genistein and scientists at the John Innes Centre have found a way to produce industrial quantities of these useful natural compounds efficiently, by growing them in tomatoes.

Tomatoes are high yielding crops requiring little care and would be cheaper than relying on artificial synthesis in a lab or extracting them in tiny quantities from traditional plant sources such as grapes or soyabeans.

The tomatoes can be harvested and juiced and the valuable compounds can be extracted from the juice.

And the humble tomato could potentially become the source of increased nutritional or medicinal benefits.

Resveratrol, found in red wine has been reported to extend lifespan in animal studies, and genistein, a compound found in soyabean which has been suggested to play a role in prevention of steroid-hormone related cancers.

“Our research provides a fantastic platform to quickly produce these valuable medicinal compounds in tomatoes. Target compounds could be purified directly fromtomato juice. We believe our design idea could also be applied to other compounds such as terpenoids and alkaloids, which are the major groups of medicinal compounds from plants.”

Professor Cathie Martin added: “Our study provides a general tool for producing valuable phenylpropanoid compounds on an industrial scale in plants, and potentially production of other products derived from aromatic amino acids.

“Our work will be of interest to different research areas including fundamental research on plants, plant/microbe engineering, medicinal plant natural products, as well as diet and health research.”

Dr Zhang and Dr Eugenio Butelli have been studying the effect of a protein called AtMYB12 which is found in Arabidopsis thaliana, a plant found in most UK gardens and used as a model plant in scientific investigation.

In response to the influence of the atmyb12 protein, tomato plants began to create more phenylpropanoids and flavanoids and to devote more of energy to doing this in fruit.

Introducing both AtMYB12 and genes from plants encoding enzymes specific for making resveratrol in grape and genistein in legumes, resulted in tomatoes that could produce as much as 80mg of novel compound per gramme of dry weight – demonstrating that industrial scale up is possible.

The study was published in Nature Communications.