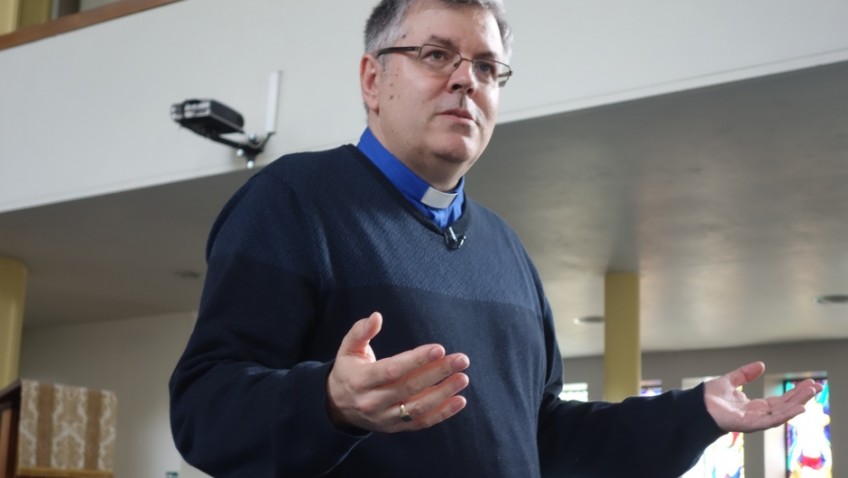 Hello and welcome to my new blog here with Mature Times.

I have to admit that I first wrote a column in the newspaper some years ago for this august organ before I was a vicar and before I was in any way mature.

If I remember correctly my MT career foundered on an article that managed to insult the residents of the Isle of Wight. Thankfully it was never published, and so I have been able to take holidays unmolested on that lovely island.

In the intervening years I’ve been to Theological College and am now a vicar in North West London at St Cuthbert’s North Wembley.

I’ve recently been running a sermon series on our saint. And what a fella he was. Cuthbert was a hermit and a bishop – but not at the same time. He loved animals and on various occasions they saved his life. His ministry was presaged by healings and miracles, but he had the common touch. He ditched the horse that came with his office and instead travelled on foot talking to regular people.

And most amazingly of all – he became a saintly superstar after his death. One hundred years after his death his followers rescued his coffin from the Viking hoards and wandered through Northern England until they could deposit it safely in what later became Durham Cathedral.

Anyway, after preaching up a storm I waited patiently by the door of our church after the service hoping to receive comments on the sermon.

More earnest and more evangelical sorts than me are waiting for some kind of detailed exposition from the congregation to show they were listening.

But with a background in marketing I know that people rarely listen carefully and the best we can hope for is that they recognise our tone of voice.

Anyway, back to Cuthbert and me. The first person who came to shake my hand had nothing to say about the sermon at all. They wanted to discuss the car park and whether we needed to get a broom and give it a good sweep.

Then I had a long discussion about QPR’s prospects this season. The upshot was that I’d need more faith in QPR going up and a quick return to the Premiership than on Jesus making a swift return in person.

On the door I also picked up an issue with haemorrhoids from one unfortunate person and a criticism that I hadn’t been tending the grass properly. But not necessarily in that order.

For me, I have to say that being a priest is a joy. I love the sheer randomness of people, because I am just as random myself. I love that people can be so normal and funny in church. I don’t like churches that are so full of religion that they forget to be human as well.

Jesus dealt with lots of odd questions and he did it without browbeating people. It still seems amazing to me that if you accept that God was one of us that he was so humble and normal.

Above all I am glad not to have a culture of nice sermon vicar and then heading off as soon as possible. If I ever preach a nice sermon give me a kick.

It is a rare privilege to have people attention for 15 minutes. I aim never to waste it. I like to send them home with a thought that will resonate during the week and the hope that God is in the everyday lives of people – warts and all. This month I am doing Movember. The picture of me below features a stick-on moustache! you can give at https://crowdfunding.justgiving.com/Revsteve

I am doing it for Memory Café here at St Cuthbert’s. I have been struck by how many people are lonely and need a love and community. And how many people struggle with their memory.

We feel very vulnerable as we get older and our memory is what makes us who we are in many ways.

We have made a wonderful start to our café. we now have four tables full of people and the atmosphere is so precious. It is a real lifeline in this community and beyond, for those with Alzheimer’s and those who just want to keep healthy.

All the money I raise will go towards developing our café further (we have plans), paying the rather large heating bill and towards publicity and food and everything else it takes.