Home / LIFESTYLE / Back to school 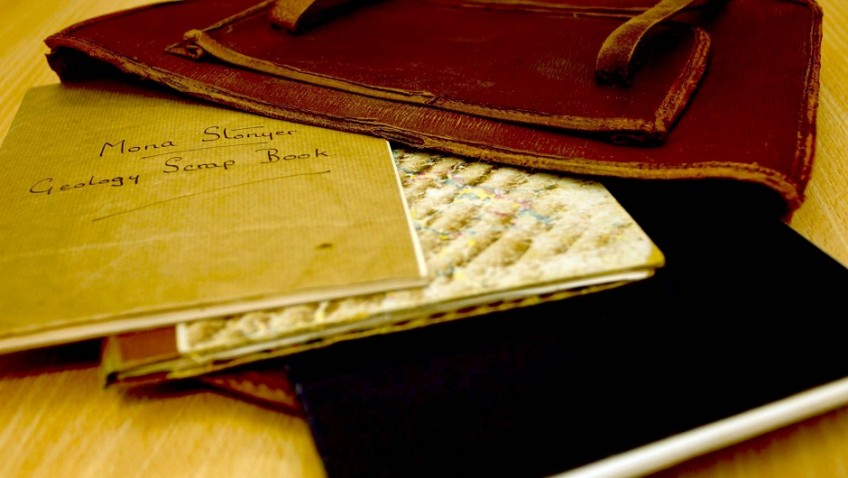 Staff clearing out cupboards at a school were stunned when they stumbled across a dusty satchel containing exercise books from a pupil – dating back nearly 90 YEARS.

The battered leather bag, which has the name Mona Stonyer written on the inside flap, had been untouched ever since it was left behind in 1930.

Inside were Mona’s exercise books for History of Arts, Biology, Religious Studies, and Geology, revealing a fascinating insight into how the subjects were taught almost a century ago.

The satchel was discovered underneath a pile of boxes inside a storeroom cupboard at Aylestone Business and Enterprise College in Hereford by staff during a clear-out in June.

They had been lying there undiscovered since 1996 after being moved to the new school site.

The college was originally called Hereford High School for Girls and records show Mona was a pupil there from 1927 to 1930. Assistant head teacher Cal Hendry, 44 – who has taught at the school for 15 years – said: “Other than the books, there was nothing in the satchel except her name and address.

“Nobody knows why it was left behind. It’s a mystery.

“In 1926 her dad was killed in a motorbike accident. She had an older sister but there is nothing in our records about her mother.

“She worked as a personal secretary for a local land security company.

“Mona died in 1990 and apparently she was very reclusive in her old age.

“We held a school assembly about the bag two weeks ago where I gave a slideshow presentation, comparing Mona’s work to that of our current pupils.

“The old books are in amazing condition and the presentation hasn’t faded.

“All of her work is neatly handwritten. She took great pride in it and it is beautifully presented.

“By showing it to the children, I was trying to emphasise the value of focus and encourage them to take pride in their work like she did.

“Our science teachers also used them in lessons to show how different their teaching methods are now, compared to those in the 1920s.

“This whole experience has been a revelation for me.”

Mona’s fourth cousin David Dewick, 66, from Stourbridge, Worcs., visited the school after a friend told him about the discovery. Yesterday he said: “I’ve been researching my family history for 12 years.

“The family were originally millers by trade and came from Scotland.

“From what I’ve found out, Mona lived in the same house all her life. She never married and she was childless.

“When she was 13 she was travelling in a motorbike side-car with her older sister Ruby. Her mother, Ellen, was riding as a pillion passenger and her dad, William, was driving.

“They were just minutes from home when William had to swerve to avoid a cyclist and there was an accident with another car which was overtaking.

“It’s remarkable that she was able to produce the quality of work she did so soon after being so badly injured and losing her father.

“I am always interested to find out more about the Stonyers so when I heard the school had found the satchel I was eager to see it for myself.

“What struck me was how precise and neat her work is. She was clearly a very intelligent girl.”

The historic books are now being kept in a display cabinet in the school reception.