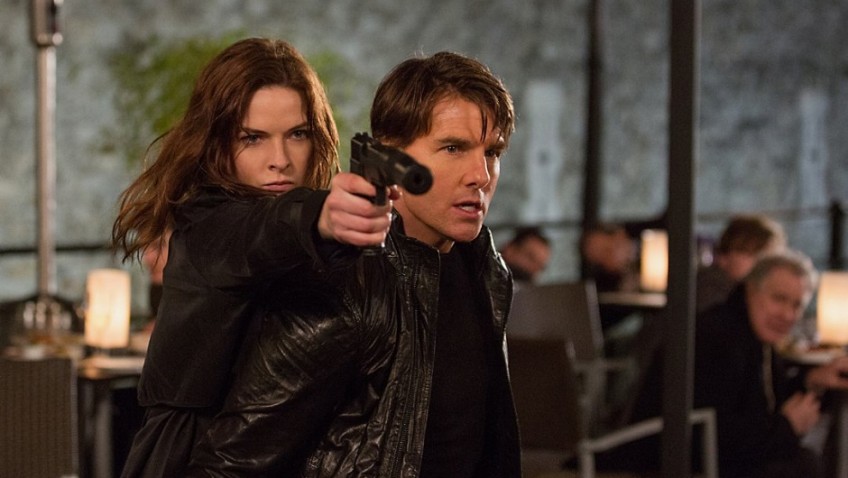 Tom Cruise is 53 and still doing his own stunts.

MISSION IMPOSSIBLE Rogue Nation (Paramount). The espionage franchise, the fifth in the series, continues with total disregard for protocol and focuses on action. Nineteen years on, and at 53, some people may feel Tom Cruise is getting a bit old for this sort of thing but he gets on with it, does the stunts, and leaves the acting to Simon Pegg and Simon McBurney (who behaves as if he is in a Le Carre film). Director Christopher McQuarrie keeps the film moving. The big set pieces on the outside of an areoplane and on the road (with motorbikes) raise the stakes. There is an excellent dilemma, cleverly solved, when Cruise is faced with two assassins aiming their rifles at the Austrian Chancellor sitting in the royal box at the Vienna Opera House.and has to decide whom to shoot first.

DAY OF THE OUTLAW (Eureka). Andre de Tooth’s superior B Western (released in 1957) is set in the remote, harsh and snowy mountains of Wyoming and is much admired by  Western cognoscenti. Robert Ryan comes to the rescue of a small peaceful community (sixteen men, four women) who have been taken hostage by a bunch of outlaws led by a former cavalry officer (Burl Ives). There is a celebrated scene, when the women are forced to dance with the sex-starved outlaws, and it feels as if it might end in rape.

A NEW LEAF (Eureka). Walter Matthau is a rich playboy who is no longer rich and decides to marry a rich heiress and murder her. The 1971 screwball comedy is scripted and directed by Elaine May who also plays the victim, a defenceless, hopeless, accident-prone botanist. The scene when his attorney (William Redfield) fails to make him understand he has no money is particularly funny.  There is also expert comic support from George Rose as a gentleman’s gentleman, from Jack Weston as a crooked lawyer and from James Coco as a greedy uncle.

RED ARMY (Artificial Eye) is a Soviet ice hockey team, the best in the world. The dazzling and brilliant team work turns sport into art. The coaches take their inspiration from chess and ballet. The players don’t have a life outside of sport. There is always the threat of sacking, prison and Siberia. When the Soviets are strapped for cash they sell their players to US teams. Gabe Polsky’s documentary covers the Cold War era and its aftermath and will have a special appeal to those who are interested in hockey and politics. The Soviets see sport as propaganda to prove that socialism works.

MIA MADRE (Artificial Eye). It must be hard making a film whilst your mother is in hospital dying. But that is what Italian director Nanni Moretti did. He has now made a film about the experience, casting Margherita Buy as the director, who is under terrific pressure on and off the set and unable to concentrate on directing the film. Moretti plays her brother. John Turturro, as a bad actor giving a bad performance in a bad film about workers going on strike, provides a bit of light relief.

UNBRANDED (Dogwoof) is a documentary for those who love wild horses and landscapes. Four young cowboys make an epic journey from Mexico to Canada over public land on horseback. The journey is 3,000 miles and includes the treacherous and vertiginous mountain paths through the Grand Canyon. The major weakness of the film is that the cowboys are uninteresting and have nothing to say.  The mustangs are breeding so fast that government and conservationists are at odds as to what to do with them: intern, cull, adopt? One solution would be to teach the mustangs about contraception.