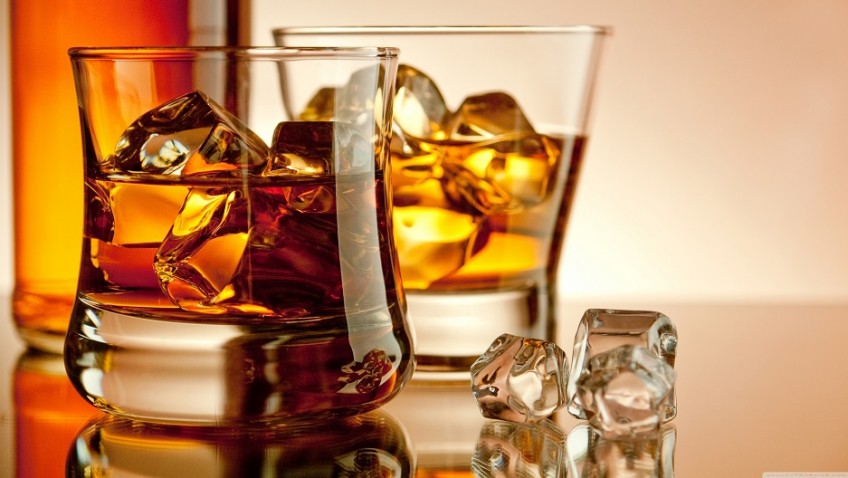 Nine whiskies, both Scottish and British, are sampled this week as I get started baking the Christmas fruity puds and cakes. Recipes for booze-soaked Christmas fruit cake always say you should let the cake ‘mature’ for at least a week before you ice it. But the cake will still taste wonderful if you start munching when it’s only been out of the oven for an hour and just (about) cooled down.

But you’ll find as you eat the rest of the cake over the coming week(s) it will become ever mellower and smoother. The sharp tangs resulting from the alcohol in the soaking liquor of choice become less obvious and finally disappear making for a more balanced cake.

You don’t need an ‘O’ level in Home Economics to make a really good Christmas cake – in fact the more feeble your efforts the better the resulting cake.

First cover and soak the dried fruit overnight in more than the recommended eighth of a pint of sherry, whisky or dark ale. I have experimented with sweet sherry (good but the sherry flavour can get lost amongst the fruit), rum (over dominates) and have now settled on whisky as the alcohol of choice. It won’t overpower your fruit cake and makes for a very satisfying drink before, during and after the cake making process.

To make the cake, don’t beat the butter and sugar as you would normally just give it a good stir, then add the remaining ingredients and this will help keep the cake mix stiff enough to support the huge amount of fruit and stop this from subsiding to the bottom of the cake. Then bake in a cool oven (gas mark 1, 140 degrees C) for three hours.

My cake soaking choice of 2015 with its flavours of brown sugar, dark chocolate and hint of darkly roasted coffee.

Leave the bottle open for a few days to get the best from this blended whisky to enjoy the now complex flavours of chocolate and honey.

Matured in sherry casks, this single malt whisky tastes like a cross between a treacle sponge and a bakewell tart with a hint of smoke. Sip or soak – your choice.

Introduced in 2014 as a replacement for Ardmore Traditional, Legacy uses a blend of 80% peated and 20% unpeated malt to make the mash that is then distilled into whisky. So what does it taste like? It tastes like toffee apple and the burnt edge on a joint of meat along with the rosemary stuffing. More of a sipper than a soaker.

The One British Blended Whisky

This blend of British whiskies has a sharp taste tempered some toffee sweetness.

A slightly different flavour to the standard The One – it’s not as sharp tasting, more like a marmalade with too much peel in it. Would add an interesting nuance to any cake.

This single malt whisky initially tastes like a Crunchie bar. Then as it moves through the mouth it takes on toffee apple and a hint of smoke. It doesn’t actually taste sweet for all that but fresh and vanillary.

Aged in Oloroso and Pedro Ximenez sherry butts, this single malt still tastes peaty and smoky but with a Chinese green tea edge. Love it or hate it, choose with care.