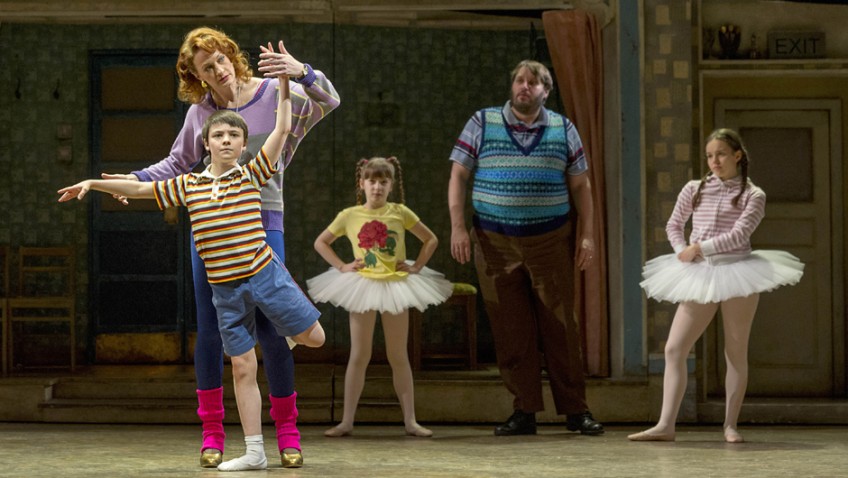 In a word “Wow”!  Having seen, and loved, the film many times this was not what I was expecting.  The story is the same: downtrodden struggling miners and their families battling the Coal Board for their jobs and their community.  The official version of the 1984 miners’ strike is still slowly leaking noxious personal stories as we strip back the layers of the devastating social impact of the conflict.

This very cleverly comes through as we enjoy the interaction between the miners and the traditionally uniformed police when they face each other in close combat during the early stages, but as the action progresses and the strike bites it all becomes more and more menacing. Haydn May in Billy Elliot

But back to Billy and his family who represent the motherless unit at the heart of this tale.  I don’t need to tell the story; we all know that.  It is the ingenious way this musical unfolds the emotions of all affected in Billy’s journey to achieve his dreams which truly engages the audience. The effect was all achieved with smoke and subtle changes in lighting; with sound and fury signifying everything. What were basic sets are moved backwards and forwards by the cast and chairs carried, making them part of the cast: these simple wooden chairs featured in many of the dances.

Billy was played in this production by Haydn May who was just outstanding. The boy has it all, singing, acting to break your heart, and his dancing is spellbinding.  Not that all the cast weren’t superb, they were. The girls of the ballet class, Billy’s father and brother and of course the senile grandma, even the ghost of his mother created very touching moments stirring the emotions of audience and several times tears followed the laughter.

There was plenty of humour created by the interaction between characters rather than scripted jokes. The unexpected dance action of Mr Braithwaite (Daniel Page) and Billy’s friend Michael (Henry Farmer) was joyous.  For me the showstopper was in the first act when the two boys played “dressing up” – I won’t spoil the moment as you just must see this for yourself.

The whole production is worth every penny of the ticket price. The music, by Elton John shows, what a great composer he is and the dancing will thrill you.  This is such a simple story of a community under threat, it is but cleverly layered with symbolism that leaves you in now doubt about how this dark period in history affected parts of our nation.

Both electrifying, captivating and poignant in equal measure, I can honestly say Billy Elliott has to be one of the best musicals I’ve ever seen. Bring your sense of humour and your tissues, but most of all bring your expectation of experiencing a wonderful show.  I can promise you that you won’t be disappointed. This is a must-see experience, so go out and buy your tickets!

To find out where you can see your nearest show visit http://billyelliotthemusical.com/tour-dates/