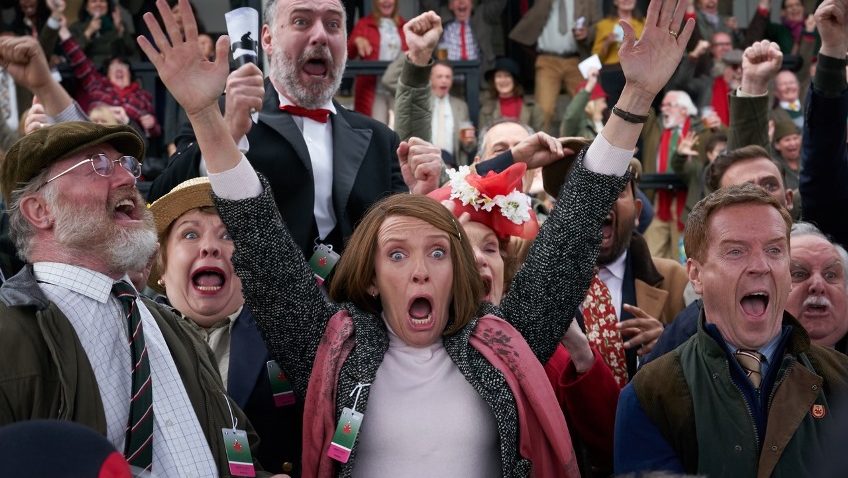 This feel-good, Welsh underdog film is true but feels formulaic.

Dream Horse reminds us it is based on a true story at the beginning by a caption and at the end, when Toni Collette and Damian Lewis are shown with their real-life counterparts. The story of a motley group of 23 Welsh folk who invest in a racehorse that wins the 2009 Welsh Grand National is so wholesome it has a PG rating. Even the gold standard of underdog, feel-good films, The Full Monty, has a 15. The warm feeling comes from the fact that these inexperienced investors form a bond, not over expectations of wealth, but over an adventure with the dream of winning.

Though the racing sequences are well-shot and thrilling, not everyone will get that warm feeling. In 2019, just before this film was shot, 22 racehorses died of injuries or heart attacks at one American racetrack alone (Santa Anita). Doping, corruption, and commercial practices to increase betting have, in the USA, though perhaps not in Wales, raised serious ethical issues about the industry.

In her younger days, Jan Vokes (Toni Collette with a fairly good accent) was a whippet and pigeon breeder. Trophies, ribbons and the odd duck and dog, crowd the ramshackle house she shares with her sedentary husband, Brian (the once thrilling and dashing Shakespearian actor Owen Teale). Now a middle-aged bar-tender, Jan feels unfulfilled. There is some talk of children, but they never materialise in the film. There are two elderly, demanding parents to cater to. The death of one, which was no doubt true, here seems like another cliché, and an injection of sentimentality.

One day, Jan overhears a tax adviser, who commutes into Cardiff for a job he hates, holding court in the pub with tales of a racehorse he once owned. He is Howard Davies (Damian Lewis), the most interesting character in the film, because his backstory brings in the unwholesome theme of gambling addiction. Davies’ wife Angela (Joanna Page) gave him an ultimatum to stay away from horses when he almost lost their home to debt over that thoroughbred he owned.

Determined to buy a mare advertised in the paper, she tells Brian to shut off the TV and asks for his help. Brian calls her mad (for one thing, where will they keep the horse) citing practical obstacles that do not phase Jan. Despite being burnt, Howard needs less persuasion. She has found a mare (Rewbell – who dies giving birth) and a stud, Bien Bien, but needs money for the breeding, vet bills and training.

Jan and Howard form a syndicate, and we see Jan handing out flyers that end up on the otherwise clean streets. An attempt at tension is created when, five minutes before the meeting is due to commence, no one shows up. Jan and Howard are about to call it quits when in they come: oddballs, retirees, the town alcoholic, the butcher, the sceptical bar owner (“if there’s going to be a circus in town, might as well have a ringside seat”) – most of whom will struggle to pay the £10 per week investment.

There is no time to make any of these real-life characters three-dimensional or give them backstories. The film remains a Jan/Howard two-hander, or a three hander if you include Brian, who leaves his chair in front of the TV and becomes physically active, as well as Jan’s main supporter.

Most of Neil McKay’s (TV’s Appropriate Adult) writing is functional, but there is a wonderful scene at the betting office just before the Welsh National when Howard, who has quit his tax job to re-focus on racing, places a bet of £50. Just before handing it in, he glances at the odds against his horse, and adds a zero. If only there was more of this and less of the whimsical stuff.

Quickly, though, Jan, Brian and Howard are eclipsed by the real stars of the film: the seven horses used to play Dream Alliance, which is the name the syndicate vote for.

Once Jan and Howard put their young horse into training under Philip Hobbs (Nicholas Farrell) the story picks up with the well shot racing sequences and the thrill of seeing the dark horse, the outsider, winning the Perth Cup.

After all, this is your typical underdog story. Sceptical Lords and snotty racehorse breeders look down their noses at the syndicate of inexperienced, clueless working-class owners and their single horse with the dubious pedigree.

Archive footage of real races are skilfully edited into race scenes, specially staged with jockeys holding small cameras that make us feel we are in the race. The crowd scenes and race scenes were shot at Newbury and Aintree and three packs of ten horses were used for the competitors. To add to the authenticity, Katherine Jenkins was hired to sing the Welsh National Anthem, and Clare Balding (who interviewed the real Jan Vokes) has a cameo.

The PG as opposed to U certificate might be explained by the scene in which Dream Alliance slices a tendon at the Aintree Festival. Euthanising the horse, discreetly hidden from the cheering crowd by screens, is a split-second decision put to the syndicate. This is the closest the film comes to the dark side of horse racing.

During one of several scenes in which Jan gives Dream Alliance, who has been taken from his loving home to the hard, lonely, impersonal life at the training farm, a pep talk. Looking in his eyes, she whispers, ‘this is what you were born to do.’

Thoroughbreds were born to run, but not competitively; not under a whip and not in crowded packs over hurdles when they cannot land properly; and not beyond the point of tiredness, when they would naturally slow down. The film ends before Dream Alliance is entered into the 2010 Welsh National but is pulled out and put to pasture. Over the 9-year period, the horse ran 38 races with total winnings of £38,646 in prize money. The 2003, Oscar-nominated film about the 1930s American racehorse Seabiscuit, was also an underdog story. He ran 89 races and earned $8,000,000 (in 2009’s money).

The risk with any true, underdog story “that has feelgood film written all over it” is that despite its truth, it becomes formulaic, predictable and schmaltzy. You stop seeing what made the original story remarkable, and see a “by the numbers”, conventionally told story that forgets to be a motion picture. Euros Lyn’s Dream Horse is saved by the racing scenes, although whether any racehorse is really “a winner” is doubtful.