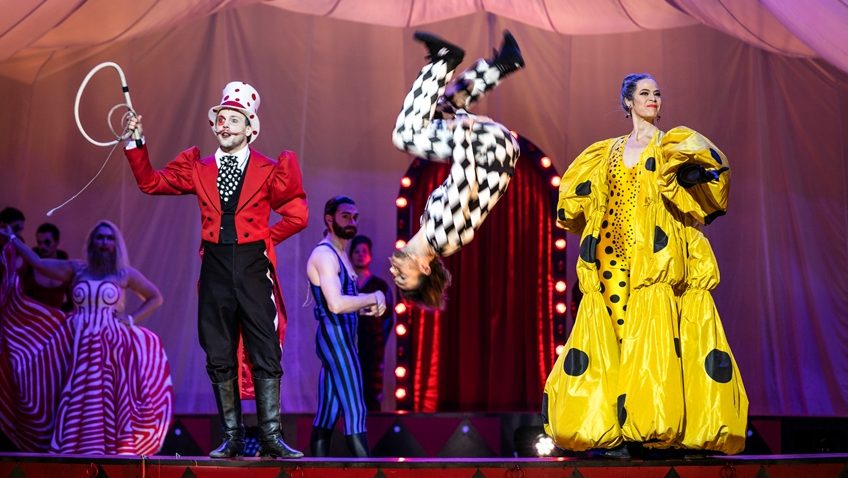 There was a time when going to the circus meant watching the hunting and killing of animals, sea battles fought by convicted prisoners, gladiators fighting to the death, and lions eating Christians. The circus’s Golden Age was the 19th century with equestrian melodramas, B T Barnum, and The Man on the Flying Trapeze.

Cirrus Krikor and Malmo Opera come together in a single place. Circus Days and Nights is a fusion of circus and opera. A circus opera! Now that is something new. The Big Top is on stage in a theatre in Malmo.

Swedish director Tilde Bjorfors and American composer Philip Glass joined forces after he had seen her production of his Satyagraha. The music has Glass’s familiar repetitive structure. He claims opera came from the Circus and not, as we have often been told, from the Church. Bjorfors has a minimalist approach. The circus (she says) is a sort of physicalisation of Glass’s music.

A day in the life of a travelling circus, always in motion, is seen through the eyes of the poet Robert Lax, who was a clown and juggler in the 1940s. The Circus, with its putting up and tearing down of tents, becomes a metaphor for life, a cycle of creation and recreation. The librettists are David Henry Hwang and Bjorfors. The narrator is Baritone Jakob Hogstrom.

The show has all the usual suspects: trapeze artists, jugglers, aerial acrobats, a bearded lady and a lion tamer (without a lion). There are flying musicians and musicians on trolleys being moved around.

There are no animals, of course; no Tod Browning freaks and no great clowns; no Grimaldi, no Grock, no Slava, no Giulietta Masina. If you want to see a film about circus life, Federico Fellini is the person to go to.

There are some spectacular and daring feats and some amazing somersaulting high up in the air with the aid of a see-saw. There are moments of beauty and grace and balance but the performance is not as profound as it thinks it is, nor as poignant as it should be.

The actual individual acts are fine; but the staging between them and the philosophical libretto need to be tightened and worked on, if Circus Days and Nights is to be a theatrical experience and not just a circus.