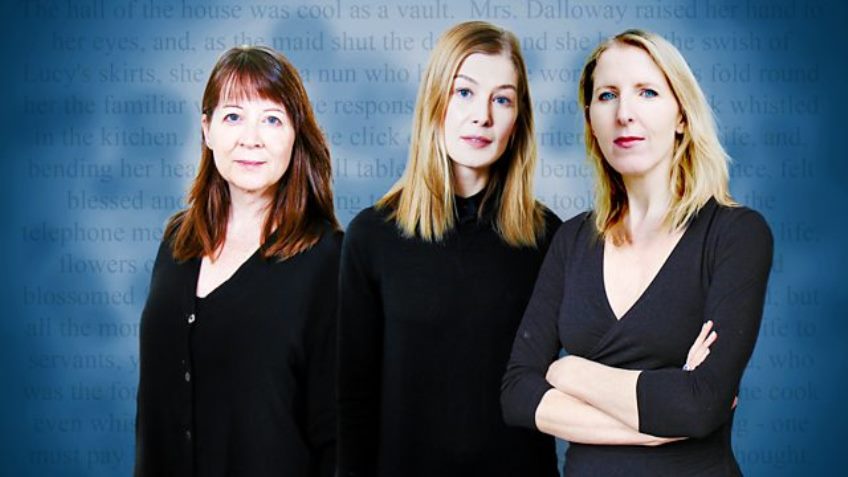 In 1999 the Pulitzer Prize for Fiction went to Michael Cunningham for his cleverly intriguing novel The Hours. Inspired by the book, the 2003 film with screenplay by David Hare won a Best picture Award, Nicole Kidman in prosthetic nose being proclaimed Best Actress in her role as writer Virginia Woolf. This radio version, adapted into two one-hour episodes by Frances Byrnes, first broadcast in 2017 and available again now, is equally creative, inventive, exciting and remarkable.

In a gripping psychological drama the lives, thoughts and experiences of three women living in the societies of three different eras are vividly depicted. Cleverly, convincingly, and with utmost suspense and engagement, elements of these three individual lives and stories interleaf, intertwine, link in overlap and/or diverge across the generations, each drama taking place on a Tuesday in June. As we head towards the eventual bombshell twist in the tales, each story keeps the listener guessing all the way where it will lead and whether someone will, or will not, die.

Each episode is presented through a mind-boggling array of dozens of scenes, some but seconds long, others minutes, yet the effect is neither frenetic nor bewildering. Far from it. The drama has, in fact, a dreamlike, unhurried quality and a wholeness, even in its elements of suspense, which keeps the listener always vividly in the moment and never lost. This is thanks to the actors’ superb delivery in an ingenious arrangement of enacted scenes and narrated streams of consciousness, massively enhanced by the stunning, skilful deployment of a vast soundscape of effects with carefully placed, wistful, haunting piano music, all meticulous in placing listeners, in a split second, in the right time and place, without being in the slightest bit obtrusive. From clinking crockery, playing children and singing thrushes to murmuring crowds and Manhatten sirens, from cake-making, lonely footfalls and a child’s echoing pleas to party music or water filling a bath, Steve Bond’s rich, far-reaching sound-pictures are a magnificent creative achievement, clearly and fully evoking the journey through these ongoing lives. No mean feat!

In “dull” 1923 Richmond-on-Thames, writer Virginia Woolf struggles with depression, paranoia, anxiety and mania to write a new novel about heroine Mrs Dalloway. Feeling suffocated and isolated, she’s desperate to be back in the bustle of London where her sister, Vanessa Bell, lives – even though husband Leonard reminds her how mentally distressed she is when there. One Tuesday in 1949 Los Angeles, Laura Brown hopelessly struggles to become the perfect embodiment of an American Dream housewife and mother, running a perfect American Dream home.

Feeling likewise trapped and unable to function, she also suppresses a despair and depression that refuse to be suppressed as she forces herself to clean and cook and bounce chirpily, her only outlet the avid reading of Virginia Woolf’s Mrs Dalloway, with whom she also identifies. In bustling 1990’s New York in the era of Aids, Clarissa Vaughn, long ago dubbed Mrs Dalloway by friend Richard, struggles similarly with self-doubt, self-criticism and the despair of striving for impossible perfection as she organises a party for her sick friend. Into the interweaving blend of frustration and despair pour themes of failure, sexuality, guilt, jealousy, the constraints of the female role, elusive freedom and the vibrant urgency of life.

Throughout, dialogue and monologue remain vital and vibrant, the poetic elements of Woolf’s work shining through along with the impact of Shakespeare’s Fear No More the Heat of the Sun with its conclusion that all must, in the end, come to dust. From the start, the main characters draw us in and hold us in their thrall to the startling end. Fenella Woolgar is Virginia Woolf, Teresa Gallagher is Laura and Rosamund Pike is Clarissa, each linked to the others through their struggle with inner battles. The intimate, confiding delivery is riveting, mainly quietly spoken yet brimming with emotion as if simmering on the edge of massive implosion. Alongside the three women in the back and forth of scenes, numerous peripheral characters also spring to life, broadening out the present stories and filling in, too, the past’s back-stories: Laura’s war-hero husband Dan and her small son, Clarissa’s down-to-earth partner Sally and daughter Julia, Richard’s former partner Walter, Virginia’s sister Vanessa Bell and her husband Leonard, all serving to create a thoroughly engaging, wonderfully crafted, suspenseful drama with three broad, riveting stories linked together for the price of one!

Available for a month on BBC Sounds. You can listen by clicking here.