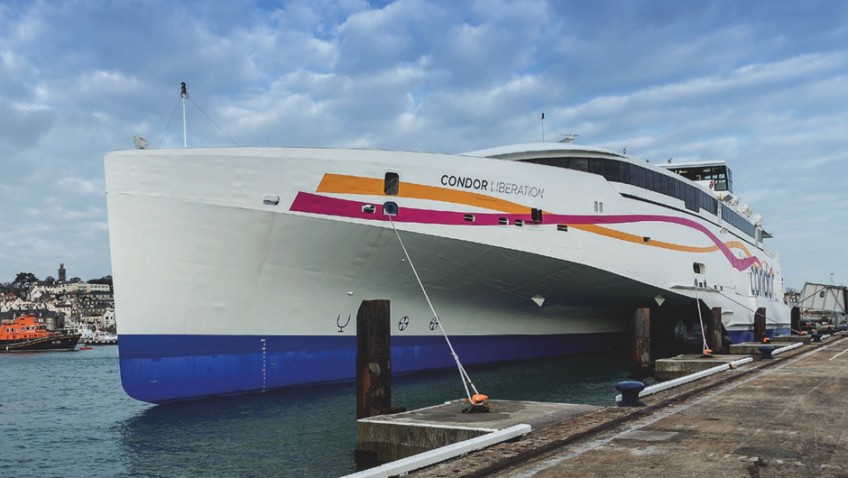 Notes from the Channel Islands

This summer I spotted a curious large white vessel streaking across the harbour in Poole, Dorset. The futuristic three-hulled shape was impressive as it quietly sailing past the white rocks of ‘Old Harry’ on the Jurassic coast.

It turns out to be the new fast-ferry the Condor Liberation – a triaman – the first of its kind in Northern Europe. For those in the know, it is officially a stabilised mono hull and was making its daily voyage to the small Channel Islands of Guernsey and Jersey that lie between England and France. This tiny cluster of islands is reputed to experience some of the best weather in the United Kingdom.

It now only takes three hours to get to Guernsey on this new fast ferry and the onward journey to Jersey takes just one hour. A day trip or a weekend mini cruise island hopping is worth experiencing. I booked a long weekend trip to the islands, leaving on Thursday and returning on Sunday.

Boarding the vessel was straightforward and all passengers are allocated a seat. The seating options are: Ocean Traveller (comfortable airline seats), Ocean Plus and Ocean Club Lounge (exclusive leather reclining seats and table service). I chose to sit at the front of the ship which offers wall to ceiling windows – a great choice as I had panoramic coastline views throughout the voyage.

There is an outside viewing deck where you can also enjoy the fabulous coastal views. The onboard catering was good, offering a range of eating and drinking outlets with a number of choices. The ship has a large Duty Free Shop giving passengers plenty of shopping opportunities, a children’s play area and useful information desk.

The crew were excellent, very welcoming and with a good sense of humour. Comedic information signs abound and their safety video really attracts your attention. This is done rap-style and gets the message across really well. It is lighthearted and generally hilarious – very ‘tongue in cheek’. It is worth watching as much for its entertainment value as for its valuable safety message.

I asked ‘nicely’ and was able to visit the bridge and be introduced to the friendly Captain, something you can’t do on an aircraft! Captain Auscow was at the helm – it all looked ‘Star Ship Enterprise’ to me but what a great view! He explained that she had three engines and two-bow thrusters, and is able to operate in all but the roughest weathers.

We were lucky to have the weather on our side that day and experienced a calm, smooth and quiet crossing. The ship can have a gentle roll in rougher weather. Captain Auscow told me that the Condor is very understanding with guests who are poor sailors and allowed passengers to change their sailing dates should the forecast be really unsettled. He wants everyone to have an enjoyable experience. In fact ‘Good Times’ is the company motto.

As we got nearer to Guernsey the Captain announced the route he was taking, pointing out the Isle of Brechou, where an impressive mock Gothic castle was built a few years ago by the billionaire Barclay brothers, owners of the Telegraph and the Spectator.

Having travelled on the old Condor last summer, this new ship offers an improved experience. It is immaculate with new carpets and big windows with views out to sea. Most importantly the new ship was so much quieter. So this is one happy traveller and in just 3 hours I was whisked to the Channel Islands.

Which Island? Why not both?

Guernsey, the first stop is an island of only 25 square miles and although self-governing it remains loyal to the British Crown. The island is rich in natural beauty with reminders of its often-turbulent past. I discovered all my favourite things coming together with their suggested ‘Tasty Walks’; a series of 15 self-guided walks highlighting food and heritage.

I explored ancient castles and took gentle coastal rambles to some of the 27 bays on the island, before indulging in a mouth-watering array of fresh seafood. I stayed as a guest of Les Rocquettes Hotel, St Peter Port; a charming three star Hotel with excellent restaurant and facilities.

Jersey, this is the largest of all the Channel Islands at 46 square miles and being nearer to the French coast gives Jersey a more cosmopolitan feel. The beaches are on a different scale to those on Guernsey. St Ouens is a beautiful beach with uninterrupted white sand stretching for five miles. Don’t miss a visit to the Durrell Wildlife Park and the thought-provoking Jersey War Tunnels (a former WWII underground military hospital). I was thoroughly spoilt at the Hotel De France, a majestic hotel with great views over the harbour.