Home / NEWS / Discover the jewels in our medieval literary heritage 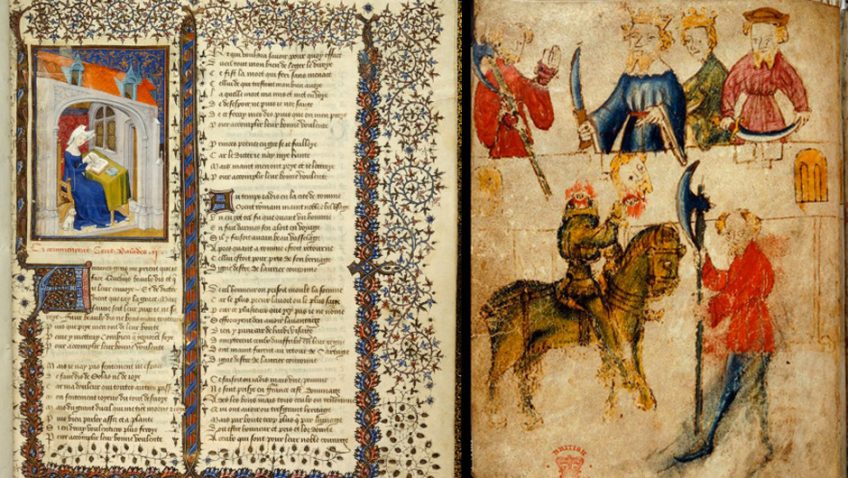 Discover the jewels in our medieval literary heritage

The British Library has made over 50 rare medieval manuscripts and early print editions, spanning 1,000 years of literary history, available for free on its Discovering Literature website.

Bringing together over 50 unique medieval manuscripts and early print editions from the 8th to 16th centuries, Discovering Literature: Medieval presents a new way to explore some of the earliest works and most influential figures of English literature; the website showcases many rarities and ‘firsts’ in the history of English literature.

Highlights include the single surviving manuscript of Beowulf, the longest epic poem in Old English; one of the greatest collections of Scottish medieval verse, the Bannatyne Manuscript from the National Library of Scotland; the earliest autobiography in English, The Book of Margery Kempe; The Wycliffite Bible, the first complete translation of the Bible in the English language; William Caxton’s pioneering illustrated print edition of The Canterbury Tales and the earliest work of theatre criticism in English, Tretise of Miraclis Pleyinge.

Featuring extracts of medieval drama, epic poetry, dream visions and riddles alongside over 20 articles exploring themes such as gender, faith and heroism written by poets, academics and writers including Simon Armitage, Hetta Howes and David Crystal, Discovering Literature: Medieval offers unprecedented access to the British Library’s collections and provides contemporary scholarly insight for young people and learners across the world.

Dr Alex Whitfield, Head of Learning Programmes at the British Library, said: ‘Discovering Literature is a fantastic resource, which enables the British Library to open up its collections to a broader audience. We are always trying to find innovative ways to help learners of all ages engage with the Library’s collections and we are so pleased that such extraordinary collection items and valuable academic insight can now be accessed by anyone, anywhere. Ultimately, we hope that the website will enrich the study and enjoyment of medieval literature for a new generation.’

Dr Claire Breay, Head of Ancient, Medieval and Early Modern Manuscripts at the British Library, said: ‘The British Library’s medieval collections are world-renowned and it’s very exciting to be opening up the Library’s collections of early literary history to young learners through Discovering Literature. Each item featured on the website has a rich history and it’s fantastic to see the unique manuscripts of Beowulf and Sir Gawain and the Green Knight, which survived a major fire in the 18th century, showcased on this digital platform for future generations to explore.’

The British Library has already published collections relating to Shakespeare and the Renaissance, the Romantic and Victorian periods, and 20th century literature and drama, and will continue to add to the site until it covers the whole rich and diverse backbone of English literature, from The Canterbury Tales to The Buddha of Suburbia.

Discovering Literature is a free website aimed at A-Level students, teachers and all lifelong learners, and provides unprecedented access to the Library’s literary and historical treasures. It has received over 7 million unique visitors since launching in 2014. To visit the British Library Discovering Literature: Medieval website, please go to: http://www.bl.uk/medieval-literature