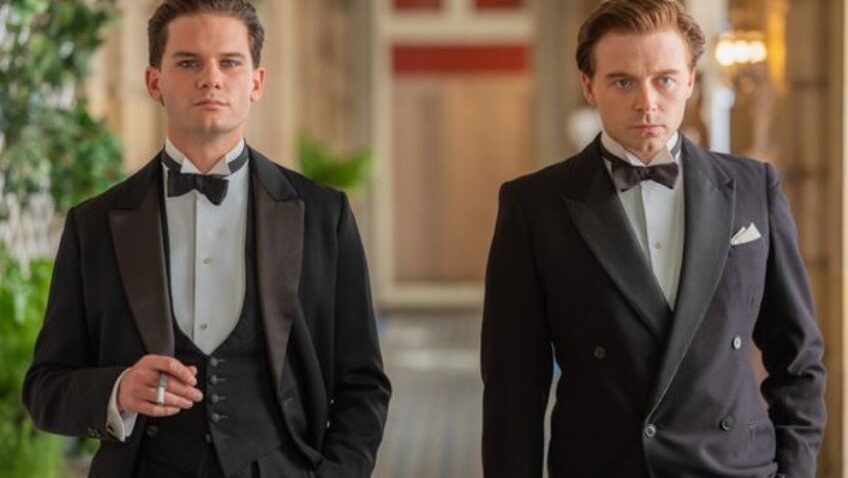 The Kent-born poet and novelist, Siegfried Sassoon is commemorated with other “Great War poets” in Westminster Abbey’s Poet’s Corner, beneath a stone that is inscribed: “My subject is War, and the pity of War. The Poetry is in the pity.” The pity, for Sassoon is that even in his burial, though awarded and decorated, he missed out on glory. Wilfred Owen, a 25-year-old soldier-poet whose craft Sassoon shaped and inspired, wrote that those two famous lines and then died in battle; an ending that the young Sassoon, nicknamed Mad Jack for his suicidal heroics in battle, did not fear.

In this impressively ambitious, if unfocused, and painfully sad film, 76-year-old Terence Davies seems to identify with Sassoon’s lifelong quest for peace as the poet grapples with his art, his homosexuality and his faith (Davies was Catholic; Sassoon converted to Catholicism).

Despite Sassoon’s (Jack Lowden, excellent) daring exploits, which won him the Military Cross in 1917, his poetry was distinguished for its “unpatriotic” nature, communicating the brutal truth of war to the flag-waving public. While convalescing from gastric fever, partly influenced by pacifists like Bertrand Russell; partly by the death of his brother Hamo in Gallipoli, and partly by the slaughter of his colleagues in the trenches, Sassoon refused to return to the front.

He sent a powerful, if treasonous, letter Finished with the War: A Soldier’s Declaration (recited off camera in the film) to his commanding officer. For Sassoon, a court-martial for treason (carrying a death sentence) was a platform for publicising his criticism of the sacrifice of young men in a mismanaged war. His mentor, Oscar Wilde’s loyal friend, Robbie Ross (Simon Russell Beale), used his connections to have Sassoon sent to Craiglockhart War Hospital near Edinburgh, for treatment of neurasthenia (“shell shock”), a capitulation that Sassoon reluctantly accepted.

At Craiglockhart Hospital, Sassoon enters into witty and meaningful dialogue with the sympathetic, homosexual Dr Rivers (Ben Daniels, excellent). He becomes editor of the hospital magazine Hydra, where his poems are published and becomes a mentor (and possible lover) to fellow-patient Wilfred Owen. Given the extent of Sassoon’s influence on Owen’s poetry, it is surprising that their literary discussions receive just a few lines in the film.

Benediction is – not surprisingly given the title – a sombre, contemplative and quiet narrative, but Davies, who wrote the screenplay, displays exceptional wit in the dialogue, particularly in the lively middle section of the film which focuses on Sassoon’s endless invitations and affairs. Sassoon’s uniform is now a tuxedo, and the intellectual conversations and ideological campaigns disappear.

As one of the Bright Young Things of roaring twenties, Sassoon, scion of a once fabulously wealthy Jewish dynasty, and a published poet, was at the top of Edith Sitwell’s (Lia Williams) and society hostess Lady Ottoline Morrell’s (Suzanne Bertish) guest list. His affair with the bitchy, polyamorous Ivor Novello (Jeremy Irvine) – Sassoon’s artist mother Theresa (Geraldine James) warns her son that Novello has “cruel eyes” – and decadent, socialite Stephen Tennant (Calam Lynch and Aton Lessor), among many others, dominate the middle section.

While Novello’s ego and sadistic personality receive ample attention, Tennant, the brother of Edward, a minor war poet killed at age 20, and David, whose Soho night club, The Gargoyle, purchased Matisse’s masterpiece, The Red Studio, is such a vapid queen, he seems to be caricatured. Robbie Ross’s character is so underdeveloped that it’s difficult to connect him with the heroic character in Rupert Everett’s Oscar Wilde biopic, The Happy Prince. When Ross dies prematurely in 1918, neither we, nor Sassoon seem to notice.

What these relationships do, however, is reveal a submissive, insecure side to the strong willed war hero, although this chameleon is not developed in the narrative.

The succession of scenes of dinner parties, bed-hopping and lovers’ quarrels might be intentionally tedious, suggesting a form of self-punishment that Sassoon endures for being a survivor. But if Sassoon is suffering from PTSD, Davies does not develop this idea. The middle section, so full of frivolity and self-indulgence that it becomes indulgent in its own right, concludes in 1933, with Sassoon’s desperate marriage to Hester Gatty (Kate Phillips), attended by old gay friends and acquaintances, including DH Lawrence. As we see in the film, (and read in E.M. Forster’s novel Maurice), gay men married to provide a cover, but Sassoon also wanted a child.

In the next section, bizarrely, Sassoon is played by Peter Capaldi (who looks nothing like Lowden) as a bitter, nasty old man, still married to a long-suffering Gatty (Gemma Jones), when in fact, their marriage ended officially in 1945. He has all but estranged his son, George (Richard Goulding); converts to Catholicism and feels passed-over for honours. There seems a rupture between the past and the present.

Then we are gifted a tour-de-force finale in which old Sassoon transforms into his younger self (played by Lowden) in military uniform, sitting on a bench in 1967 reciting, through a torrent of tears, Wilfred Owen’s poem Disabled. The camera shifts from Lowden to an amputee; the voice of the poem, Disabled. It is powerful stuff.

Benediction lacks the integration of the poet’s work and life that enlightened Davies’ brilliant biopic of Emily Dickenson, A Private Passion. In this film, Sassoon’s poetry is occasionally recited, usually in voice-over, but barely mentioned in the dialogue. Is Ivor Novello’s slur that Sassoon’s poetry has not evolved a fair point? Even Sassoon’s popular novels known as The Sherston Trilogy are fictionalised autobiography about his war experiences. He can’t shake it off and progress.

Davies fails to explore, let alone dramatize why Sassoon was a bitter old man. Was it professional disappointment? Did he feel passed over for glory? Sassoon alludes to T.S. Eliot’s Nobel Prize, but Davies fails to mention the 1962 consecration of Coventry Cathedral to which Sassoon must have been invited. There, Benjamin Britten’s War Requiem was played before the Queen, with lyrics by Wilfred Owen.

In a Craiglockhart Hospital scene, Davies plants the notion that Sassoon is to spend his life searching for something, but he fails to dramatise this quest. Was it his sexual identity, a lost love, or was it professional fulfilment? Or, perhaps, it is something more spiritual, although there is no sense in the film that his religious conversion was the answer.