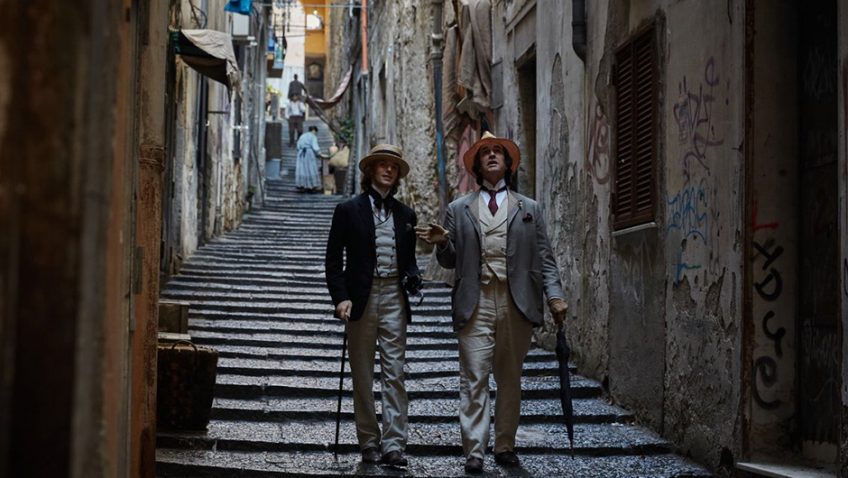 Rupert Everett’s labour of love completes his life of Wilde

Actor Rupert Everett’s great interest in Oscar Wilde is both professional and personal, with, you can’t but think, a ‘there-but-for-the-grace-of-God-go-I’ empathy. Tall, charismatic, imposing, articulate, witty and openly gay, Everett played Wilde in David Hare’s play The Judas Kiss, but was equally good in the film adaptations of Wilde’s romantic (heterosexual) comedies – An Ideal Husband and The Importance of Being Ernest. Now, after a ten year slog that was itself the subject of a recent episode of BBC’s Imagine series, writer/director/producer/star Everett brings Wilde back to the big screen in a biopic that covers the painful final three years of his life.

Everett’s pulls out all the stops, transforming himself physically (prosthetics, attitude and weight gain) and delivering a bravura – occasionally self-indulgent — performance of a self-indulgent genius. It’s difficult to not admire the Wildean wit, the rich evocation of turn-of-the-century Europe and an unapologetic, and the vivid imagining of Wilde’s debauchery, even if his self-destructive downward spiral becomes tiresome. Everett piques our interest in Wilde’s wife Constance (Emily Watson), and in Robbie Ross (Edwin Thomas) – the real hero of the film – but their characters are undeveloped and their stories are left half told.

Though Wilde’s two years of hard labour in Reading Gaol weakened him, when he arrives in France under the pseudonym of “Sebastian Melmoth” (a combination of Saint Sebastian, and the character Melmoth from a Gothic novel by Wilde’s great-uncle, Melmoth the Wanderer

), he is immaculately dressed, with expensive luggage bearing the initials of his new name. Wilde’s loyal friend and occasional lover Robbie Ross and the writer Reggie Turner (Colin Firth) assist their old friend and keep him company. Ross stays with Wilde in Northern France while he writes The Ballad of Reading Gaol

and throughout the film we hear the famous lines from that poem, ‘Yet each man kills the thing he loves.’

If the film allows us to read into that line, the titular children’s story can be seen as a metaphor. The irony of the title is apt enough although the fit is not perfect. With a clear view of the town from his plinth, the Prince who ‘did not know what tears were for’ while alive, now sees and feels the sorrow of his people. A little swallow who has become separated from his migrating flock becomes the Prince’s messenger, distributing the statue’s decorative jewels and gold pieces to needy humans below. The swallow remains with the Prince over the winter, knowing he will die of cold. 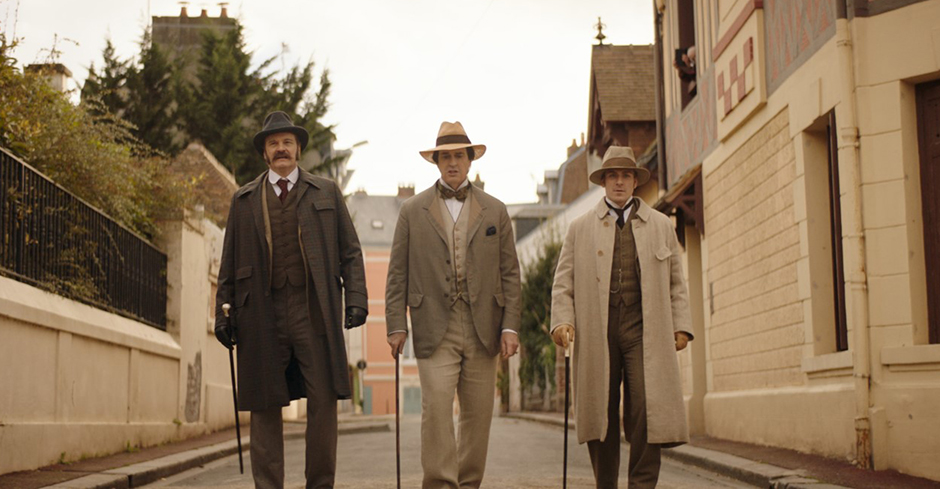 We see Wilde reading this story to his adorable young sons tucked up in bed in happier times, when he is respectably married, having his affair with Bosie (Colin Morgan) and standing in the limelight in a packed London theatre. But we also see him reading the story to two orphaned Parisian street kids, who are hardly surrogate sons for Wilde in exile. Wilde uses the elder boy, Jean (Benjamin Voisin) for his fixes of cocaine and illicit sex.

Everett has borrowed the story-reading device from the 1997 biopic, Wilde, in which Wilde (Stephen Fry) reads his story, The Selfish Giant

to his sons early in the film and again (not to his sons) at the end. That begs a comparison with the earlier film, which is both more conventional, but dramatically involving. 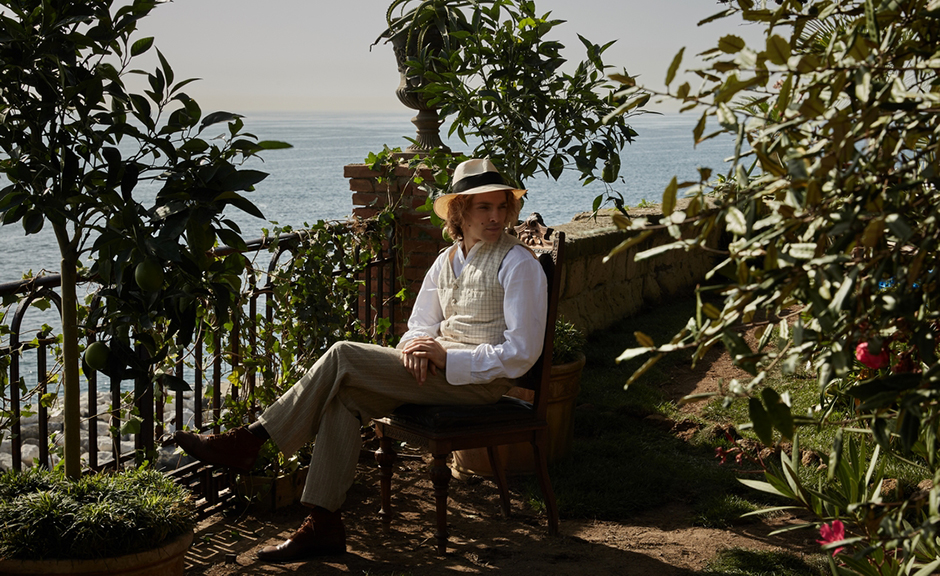 Colin Morgan in The Happy Prince

less a chronological re-enactment than a montage of key events from the years 1987, when Wilde gets out of prison, to 25 November 1900 when he is buried in the Bagatelle cemetery.

These scenes seem to emanate from his sick bed following a fall. Wilde now slovenly, bloated, behind in his rent and a bombastic, drunken bore, appeases a nightclub crowd by singing The Boy I Love is Up in the Gallery to increasingly enthusiastic (and inebriated) cheers. The effort is too much, though, and Wilde collapses, hitting his head and passing out. We travel back to the playwright’s successful double-life in London when he is basking in attention on a London stage. By contrast, we see what Wilde considers his lowest point. Forced to sit on an open platform en route to the gaol, he is attacked by a crowd of men who hurl insults at the once celebrated author and spit at him. 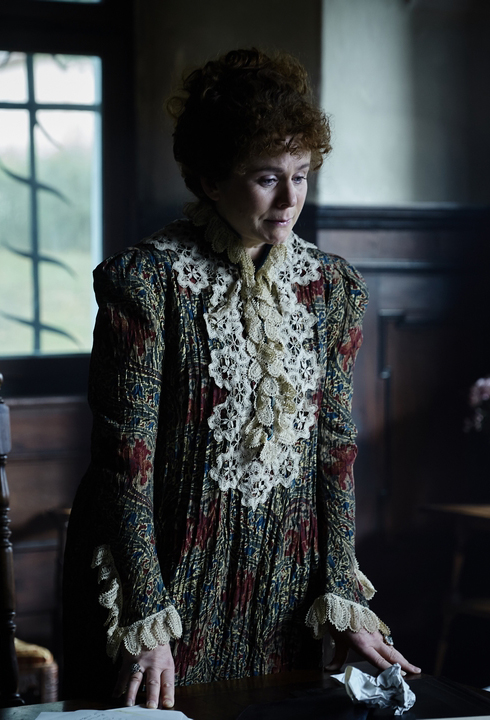 Emily Watson in The Happy Prince

This point of view is not consistent, however, and the drama wanes as it loses its narrative flow. The scene in which Constance is being persuaded by her stuffy advisers to cut Wilde out of her life (he is hoping for a reconciliation) is not one that Wilde could be imagining. Yet we long to remain with the emotionally torn Constance who is walking on crutches and is herself soon to die of syphilis.

A caption at the end leaves us feeling short-changed about Robbie Ross, too. He is a fascinating character who could be the swallow in The Happy Prince

story. We are told that after Wilde’s death Ross spent the rest of his short life as Wilde’s literary executor working tirelessly to restore his name and that he was buried next to Wilde at Père Lachaise. What we are not told is that Ross commissioned Wilde’s famous tomb from the sculptor Jacob Epstein and moved his remains to the prestigious Père Lachaise, in the company of Proust and Molière. A Canadian journalist, art critic and art dealer Ross made a significant contribution to British culture himself and remained close to Wilde’s two orphaned sons.

Much more attention is given to Lord Alfred ‘Bosie’ Douglas, who visits Wilde in Rouen, and persuades him to travel to Italy where they would live on Bosie’s mother’s allowance. As Wilde must have foreseen Bosie’s mother and Constance are furious and all funds are cut. This debauched interlude fails to inject the emotional charge that the film needs, partly due to the writing, and partly to Morgan’s underwhelming performance. No one, least of all a jealous Robbie Ross, understood what Wilde saw in Bosie. But as director, Everett needs to show us, or at least make us feel the inevitability of the fatal attraction.