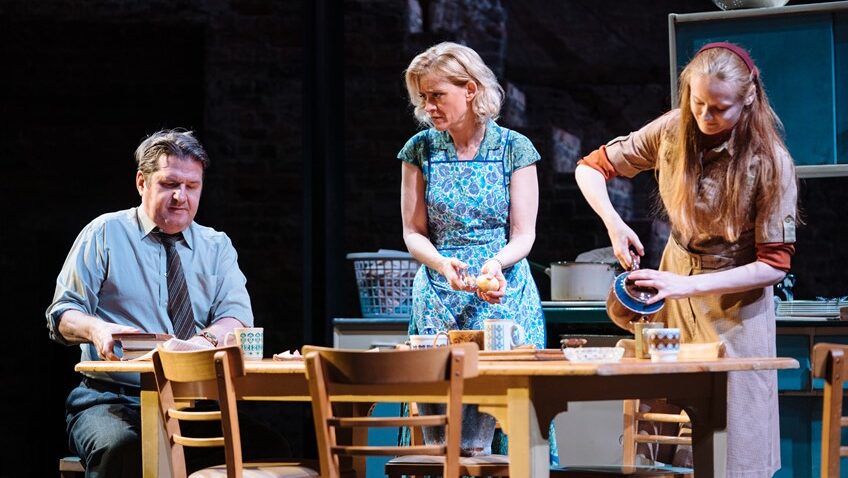 Beth Steel’s The House of Shades is a Northumberland working-class, three-generational, kitchen-sink family drama, spanning half a century from 1965 to 2019, and observing the huge political and social changes and recording the failure and death of the Labour party.

Beth Steel is the author of Wonderland, a vivid and powerfully staged account of the 1984/1986 Miners Strike, which won her an Evening Standard Award for Most Promising Playwright.

The House of Shades, directed by Blanche McIntyre, is not in the same league, but there are impressive performances by Annie-Marie Duff and Stuart McQuarrie as a married couple who hate and despise each other. She wanted to go to grammar school, and be middle-class and a famous singer. She ends up an embittered housewife and mother, living a life she loathes and behaving badly.

Her husband was a Trade Union officer, a firm supporter of the Labour Party. As he grows older, so he becomes less and less Labour and more and more Tory. His hysterical daughter (Kelly Gough), who remains determinedly Labour, is disgusted.

McQuarrie has two fantasy scenes: one with Aneurin Bevan (Mark Meadows) when they talk politics; the other, when he is dead and talks with his live grown-up son (Michael Grad-Hall), The boy, in his teens had been an avid communist; now, in middle age, he is a Thatcherite.

The characters’ older and younger selves sometimes share the same stage, their present and past physical and verbal fights complementing each other. There are too many scenes, and too many characters; and, with some actors doubling roles, Beth Steel’s play can be confusing and heavy-going. It would benefit from some serious cutting.