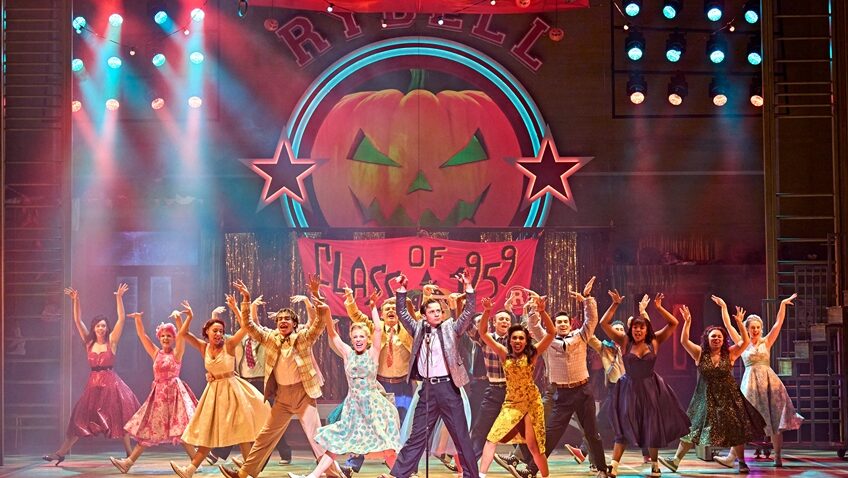 Jim Jacobs and Warren Casey’s Grease premiered in 1971 and following its Broadway run of 3,388 performances, it went on in 1978 to become the most successful musical of all time.

High school musical comedies have always been popular ever since the 1930s when they usually starred nice Mickey Rooney and nice Judy Garland.

Grease takes a nostalgic look at the 1950s when things were not so wholesome. It was the age of leather jackets, balloon skirted, rigid quiffs and bobbed hair, an era when kids had to decide who their model was going to be. Was it going to be Sandra Dee or Elvis Presley? Were they going to be square or cool?

There have been numerous stage versions since the 1978 film. Grease is now back at the Dominion where it ran for 236 performances from 1993 to 1996.

The present production, directed by Nikolai Foster, draws on the stage and film versions. The stage is loud and colourful. The lighting is often blinding. The storyline is weak. There’s too much chatter, too much screeching. The Dominion is a barn of a theatre. The show is massively amplified and it is not always clear who is talking.

Don Partridge and Olivia Moore have the lead roles. Moore is off-stage for too much of the time for them to have any real contact with each other and for anybody to care about them.

Jocasta Almgill makes an impact with There Are Worst Things I Could Do. Peter Andre gets star-billing in a supporting role of Vince Fontaine. One of the best moments is Noah Harrison and Mary Moore singing Mooning.

I enjoyed most the energetic abandonment of Arlene Phillips’s choreography, all waving legs and hands, notably in Greased Lightning and Shaking at the High School Hop.