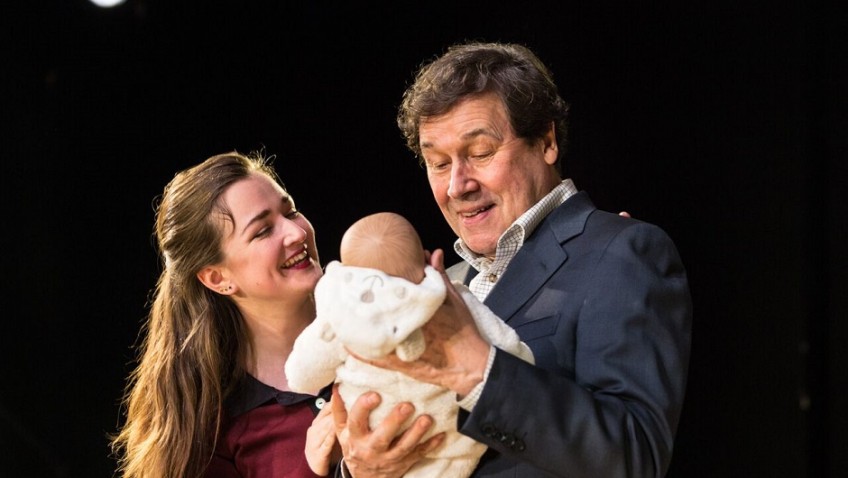 A superb performance by Stephen Rea in “Cyprus Avenue”. Irish playwrights have a long tradition of mixing comedy and violence.

Eric, a Belfast Loyalist, still living in the past and fighting old battles, is deeply disturbed to the point of madness. He is convinced his 5-week old baby granddaughter is Gerry Adams.

The play opens with him talking to a psychiatrist (Wunmi Mosaku) and his story is told in flashback. Eric is what he is because he was born a Protestant.

He hates Republicans and Catholics.  In one absurdly comic moment, he sees Fenians everywhere. In another he gives an amusing account of being mistaken for an Irishman when he is in London.

He loves Ulster more than he loves God. Deluded and suicidal, he is full of prejudice, hatred, foul language and violence. He argues that without racial prejudice the Ulster Protestants are nothing and they won’t survive

His resentment, disappointment, false expectations and ruined dreams have made him paranoid about losing his identity: “I am not and never have been nor ever will be Irish.”

There is a key scene he is confronted by the paramilitary, a member of the UVF (Chris Corrigan), who is as mad as he is and willing to kill anybody, including him, so long as they are not celebrities.

His confusion and despair are brilliantly brought out by Stephen Rea, who is comic yet ineffably sad. The performance swings confidently between the normal and the abnormal.  Finally, the black farce turns so horrific that suddenly nobody is laughing anymore.