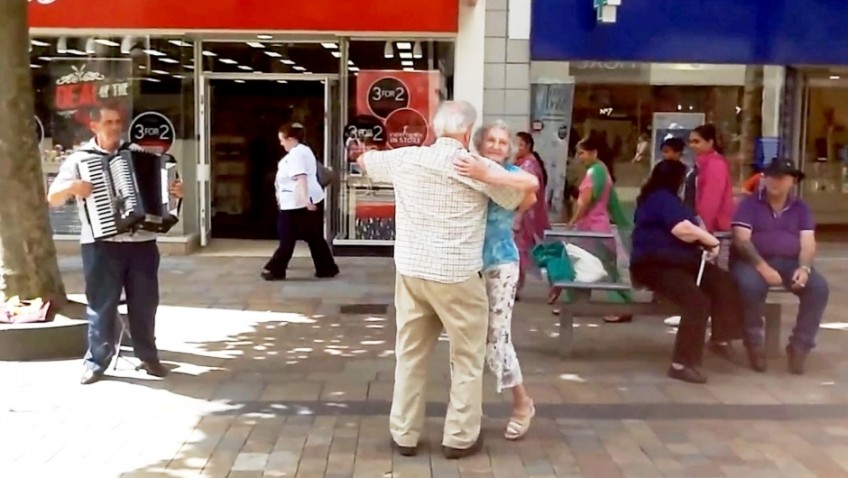 An elderly couple have become an internet hit after they were filmed ballroom DANCING in the middle of town after hearing a busker playing their favourite tunes.

Joan Culberwell, 86 and her partner of 40 years, Thomas McGonigal, 84, brought Strictly Come Dancing to the streets when they waltzed in front of a stunned accordion player.

The pair, who met at a dancing class in the 197s, delighted dozens of passers-by with their ballroom routine at lunchtime on Monday (4/8).

Scores of shoppers and workers stopped in Wolverhampton city centre to watch the quick-footed couple and soon began to cheer and clap at the heart-warming scene.

Incredibly, just hours after the two-minute clip of their dancing was uploaded to YouTube, the video attracted over 2,000 hits.

Retired bricklayer Thomas said: “We are amazed at the response from people. It wasn’t a planned thing, Joan and I were walking through town to Boots when we stopped to listen to a busker.

“He was playing a medley of lovely ballroom tunes and I could sense Joan moving her feet. I was tapping along and just said to her ‘may I take this dance?’ and that was that.

“I suppose we got carried away but people were cheering and clapping and we just went along with it. It was a lovely sunny day and the shoppers seemed to like it.

“The busker had no idea what we were doing but kept on playing.”

The couple, who live in Wolverhampton, have been together for 40 years but have never married.

Thomas added: “We have both started dancing when we were about 14. We love it.

“We actually met ballroom dancing about 40 years ago at the Dorchester Dance Hall on Temple Street.

“We got to know each other and have been dancing ever since. We used to do it a lot more but there aren’t so many places to do it any more, that’s why we took our opportunity in the city centre.

“I hope to see even more people catch the dancing bug – and perhaps start quick-dancing down their streets too.”

Joan, who has two children from a previous marriage, added: “We watch Strictly Come Dancing together every week when it is on, and we are very nimble for our age.

“We do the cha cha, waltz, fox trot, samba, the quick step, we do them all.

“We used to go to the Civic Centre to dance but they prefer the bigger shows like gigs and famous performers so there are not as many dance nights as there used to be which is a real shame.

“It is something we miss.”

Shopper Daniella Brook, 25, who filmed the dancing duo, said: “I was just out shopping with a friend and saw them and it touched my heart that they are still in love with dancing, and each other, after all these years.

“It’s lovely to see. I hope they do more shows, they were very graceful.”