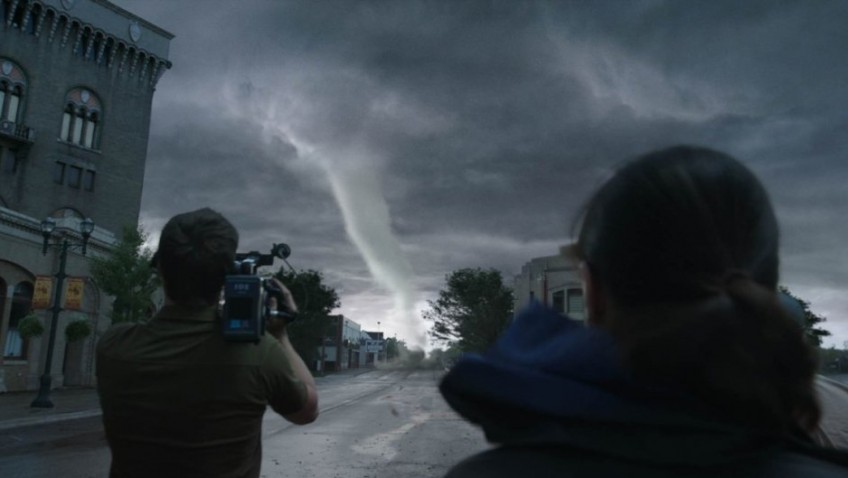 Into The Storm with full force of CGI

Well timed to coincide with the beginning of the hurricane season in the USA, Into the Storm combines two genres: the end-of-summer disaster movie and the found footage movie.  The later, done and dusted, to put it mildly, since the Blair Witch Project, the found footage idea is, in this case, logical, as the film is about storm chasers whose lives are devoted to capturing the world’s worst storms on video.  The acting is just about passable, the characters underdeveloped and John Swetnam’s script is banal, but Director Steven Quale does what he was hired to do: deliver non-stop chaos and about 80 minutes of spectacular special effects.

The film unites the story of single father and Silverton High School teacher Gary Morris’ (Richard Armitage), and his two sons Donnie (Max Deacon) and Trey (Nathan Kress) with that of Pete (Matt Walsh), the obsessive storm chaser and his crew.  You know the two strands will merge and they do.

Pete’s principal backer has chosen a bad time to end their contract for lack of results.  In a matter of hours a succession of killer tornadoes is about to head for Pete’s custom-made tank.  Defiant at his sponsor’s decision, Pete decides to fund the project himself and pushes his crew of two camera men, a driver/camera operator and meteorologist, single mother Allison Stone (Sarah Anne Wayne Callies), to the limits.   Pete is a selfish man who must be punished in a fitting manner; and he is.

With Pete’s savings at stake, he argues with Allison over the direction of the storm.  All the storm chasers are heading in one direction, but Allison bets on Silverton, where, unbeknown to her or the crew, Gary Morris is heading to his school’s graduation ceremonies.  Gary’s eldest son, Donnie, is supposed to be filming it but Donnie goes AWOL when Kaitlyn (Alycia Debnam-Carey) a pretty fellow student he has a crush on, enlists his help with her term project at an abandoned warehouse.   They later need to be saved by dad, who by then has joined forces with Pete and has met the attractive Allison.

Allison’s forecasting and tracking equipment is in one van and Pete and his crew are in his purpose-built tank, designed by Pete to withstand winds of 170 mph. The tank is, naturally, put to the test when the winds of multiple simultaneous tornadoes rip through Silverton and reach several times that speed.

Armitage, currently playing to rave reviews and packed houses in the Crucible, in London, tries hard to rise above the material, but no one goes to see Into the Storm expecting Oscar-worthy performances. A routine ending sees the survivors glad to be alive with their loved ones, and with a newfound respect for the powers of nature – and for CGI effects.