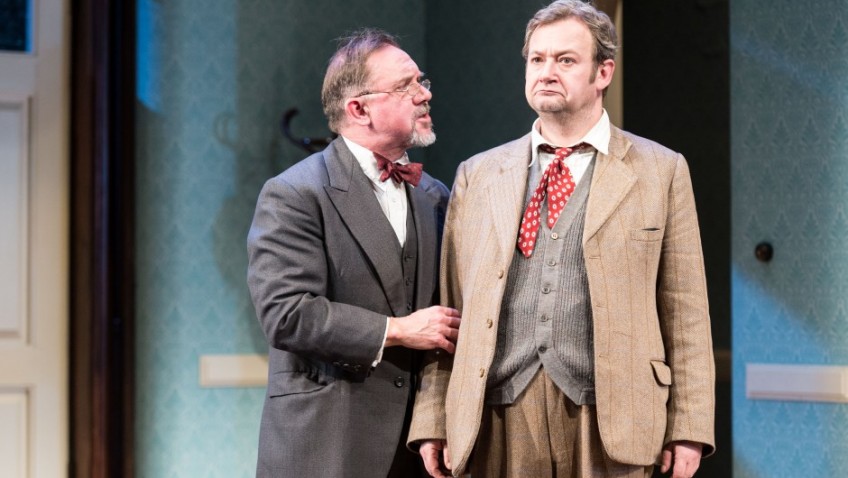 Mary Chase’s whimsical, sentimental farce, which opened on Broadway in 1944, was wartime escapism and extremely popular with American audiences then.

Nevertheless, many people will still be surprised to learn that the critics of the day awarded her the Pulitzer Prize for Best Play rather than give the award to Tennessee Williams for The Glass Menagerie.

Harvey is a giant six foot three and a half inch rabbit, the constant companion of Edwood P Dowd an alcoholic and a dreamer, and only visible to him.

Dowd is forever identified with James Stewart who played him in New York and London and on film and made the role his own.

James Dreyfus is absolutely fine as Dowd, finding his own charming way of playing this sweet, gentle, kind, generous guy, who is friendly to everybody and does not want to face up to reality and accept his duties and his responsibilities.

His sister (Maureen Lipman) wants to lock him up in an asylum. The irony is she is far more insane than he is.

The psychiatrist (David Bamber), too, is no saner than Dowd. It is rather strange that his best scene should be reported at length rather than staged.

Mary Chase is full of homespun American philosophy, along the lines of “it is infinitely better to be pleasant rather than smart” and who who wants to be a perfectly normal human being when normal human beings are so awful?”

The play was always too long and too slow and badly in need of editing. There is still far too much padding and too many cardboard characters.