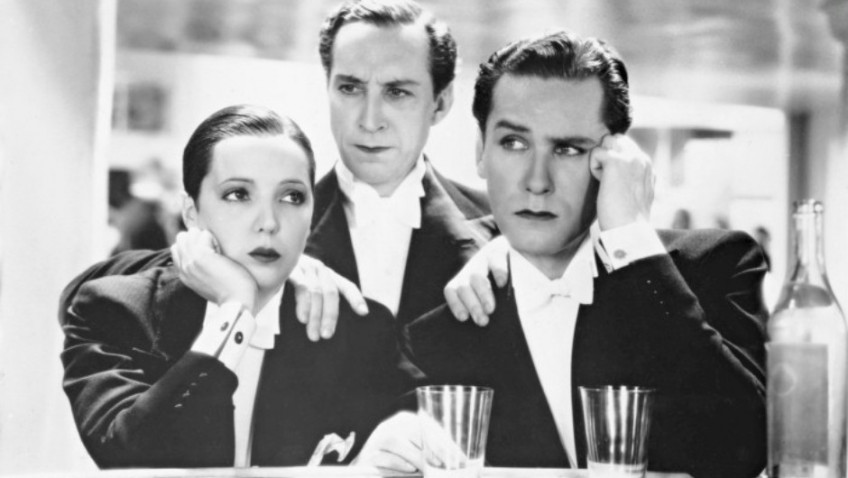 Six British films from the 1930s

FIRST A GIRL. Griffith Jones (the handsomest leading man in British films in the 1930’s) falls in love with a girl only to find she is a boy; but actually she is a girl pretending to be a boy who does female impersonations. There is, however, no sexual ambiguity. This is, after all, a British film and the censor then wouldn’t want it. It’s based on a much more explicit German play, which was also the inspiration for Julie Andrews’s Victor/Victoria.  It’s all very innocent and besides the delightful bright-eyed Jessie Matthew is always much more convincing as a girl than she is as a boy.

FRIDAY THE THIRTEENTH is not really a Jessie Matthews film. She gets star billing but she is just one member of an all-star ensemble. Two people are killed in a London bus crash. But which two? The passengers include a dear forgetful old lady (Mary Jerrold) a fast-taking thief (cheeky Max Miler), a chorus girl (Jessie Matthews) a cuckolded clerk (Eliot Makeham), a suburban hen-pecked husband (Robertson Hare), a smooth blackmailer (Emlyn Williams – who also wrote the dialogue). The script then flashes back to what they were all doing earlier in the day. It’s a portmanteau film, a neat and lighthearted variation on The Bridge of San Luis Rey. The cast also includes Edmund Gwen, Gordon Harker, Frank Lawton and Ralph Richardson.

Two plays by Ben Travers. The legendary I920’s Aldwych farces relied entirely on the comic personalities, business and expert timing of the original actors, which makes them extremely difficult to revive successfully today.

A CUCKOO IN THE NEST. The 1933 film version, a totally no-sex-please-we-are-British bedroom farce, fields the 1923 stage cast of Tom Walls, Ralph Lynn, Yvonne Arnaud, Robertson Hare, Mary Brough, Grace Edwin and Roger Livesey.  The film may therefore be of interest for theatre historians; but it’s pretty heavy-going for everybody else. Walls does his drunken act. Lynn does his labored stage business. The appeal of Arnaud, as it always was, is her French accent.

TURKEY TIME dates from 1933 and is a turkey in the show-biz sense and the only actor worth watching is Robertson Hare, a farceur, who is vocally and physically in a class of his own and far more subtle than Wall and Lynn.

LET ME EXPLAIN, DEAR. This farcical nonsense about a Thames Water cab crash and a stolen necklace is an adaptation of a stage play by Walter Ellis which ran for 1,241 performances in 1915 and was then called A Little Bit of Fluff, which sounds much more fun. (The title was probably too risqué for the censor.) There were three films versions. This is the third 1932 one. Gene Gerrard, Viola Lyel, Claude Hulbert and Amy Veness (mistaken for a man in drag) are manic.

THE OUTCAST is a cheap-looking 1934 vehicle for Leslie Fuller, who was an extremely popular comedian in the 1930’s. He and Hal Gordon play two music hall artistes. (The film and their performances feel like an extended music hall act.) Their wages are stolen. They turn bookmakers and lose more money. Fuller, a soft-hearted chump, ends up in prison. Gordon manages to train a greyhound which wins them both a fortune at the Wembley Dog Park.