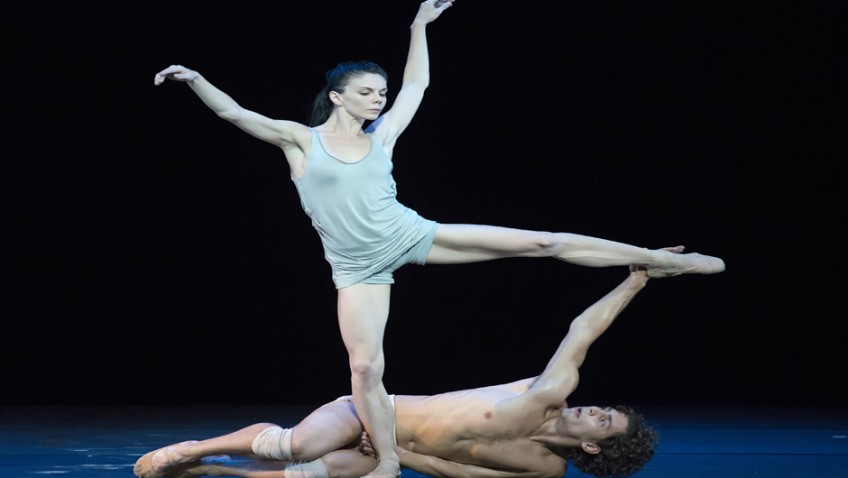 A showcase for virtuosos Natalia Osipova and Ivan Vasiliev

“I wanted the dancers to cross the boundaries between contemporary and classical dance,” says Sidi Larbi Cherkaoui, whose Mercy is based on two duets. Osipova is in a flimsy dress and Vasiliev is in his underpants and knee pads. He looks good casting for a hunk in a Hollywood BC epic, such as Hercules.

A couple fights to religious music: punch, kick, knee and head butt each other.  She leaves the stage. He dances a solo and collapses. She returns and he is floored. He grovels. Finally, they lie down side by side. The journey from domestic violence to domestic tenderness is complete.

In Ohad Naharin’s Passo, Osipova does strange things with her extremely supple body and Vasiliev apes her. She is unimpressed and walks off.

She returns. A mandolin plays. They do more strange things. Vasiliev seems even more primitive. Greensleeves is sung. Are they mating? Is this evolution? Dire, except for the final stretches and the leap into his arms.

A comic melodrama follows. Choreographer Arthur Pita has adapted his God’s Garden and called it Facada, a Portuguese word meaning stab.  A bride-to-be, all in white, deliriously happy, waits for the groom. When he arrives he takes three looks at her, screams his head off, and runs away.

Jilted, she literally weeps buckets of tears, sufficient to water the flowers. Meanwhile, he takes off his wedding gear and strips to his underpants and socks and suspenders. She murders him with a butcher’s knife and then, this is the high spot, she dances on his grave.