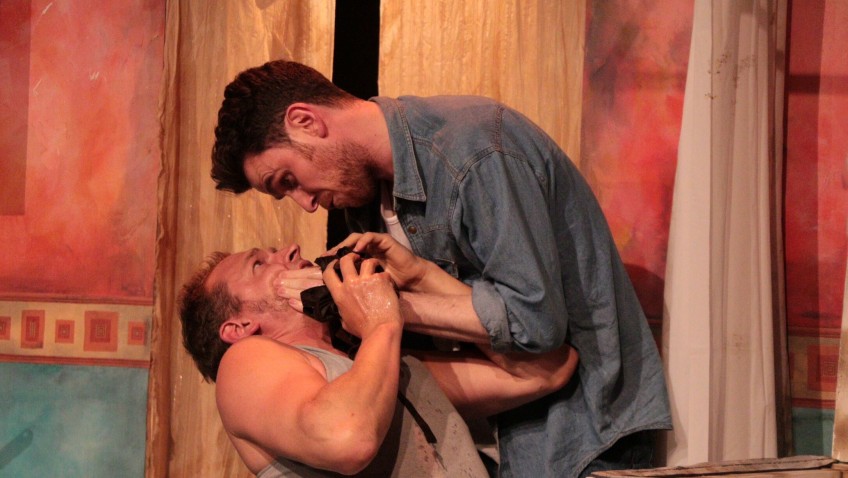 Sam Shepard has said that one of the great tragedies of contemporary America is that families fall apart. The Late Henry Moss is in the same raw, American-Gothic dysfunctional family mould as such plays of his as Curse of the Starving Class¸ Buried Child, True West and A Lie of the Mind.

Henry Moss dies three days before the play opens. His body remains unburied. His two grown-up sons, who haven’t seen each other in seven years, are reunited. Both brothers have been brutalised by their childhood.

The younger (Joseph Arkley) suspects the older (Jack Sandle) may have murdered their father and he interrogates a Hispanic prostitute (Carolina Valdes) a Mexican neighbour (Chris Jared) and the taxi driver (Joe Evans), who drove him on his lasting fishing trip, in an attempt to get at the truth.

Their stories are told in flashback and reveal Henry Moss (Harry Ditson) as an alcoholic brute who regularly beat their mother. She finally locked him out of the house and he ended up in a squalid cabin in the New Mexico desert.

Moss, a larger-than-life, a vile walking-dead monster, had been “dead” for a very long time and only needed a bit more booze to finish him off.  The character has his roots in Shepard’s own father who had served in World War 2 as a pilot and thought of his war pension as blood money for all the people he had killed: “I served my country. I’ve dropped bombs on total strangers.