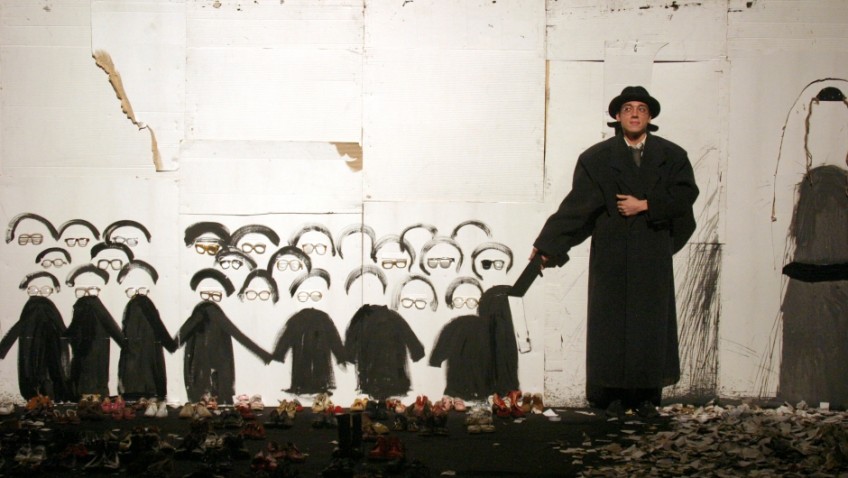 Dmitry Krymov and his Laboratory are part of the Moscow School of Dramatic Art Theatre. They bring to London their 2008 production, which is directed, devised and performed by those trained predominantly in stage design.

The performance is in two parts, both lasting an hour, with an interval of 30 minutes. The audience is seated on the Barbican stage. The fire curtain is down and the auditorium is cut off completely.

One of the images I have never forgotten from my visit to Auschwitz is of a small room lined on both sides with glass cabinets which reach to the ceiling; and inside the cabinets are piles and piles and piles of shoes.

The first part of Opus 7 is devoted to the Holocaust and mourns the Jews who died. Shoes, spectacles and photographs figure prominently. The production is notable for a huge paper storm. It is as if the ashes of the dead are being thrown in our faces

The second part is devoted to the life of Dmitry Shostakovich. Mother Russia (represented by a giant 17 foot puppet) turns into Mother Stalin and shoots leading Soviet artists.  The only one to survive is Shostakovich who then has to compose what he is told to compose.

The most memorable scene is a parade of seven grand pianos which are not played but used by the cast as if they were dodgem cars and they start viciously ramming each other.