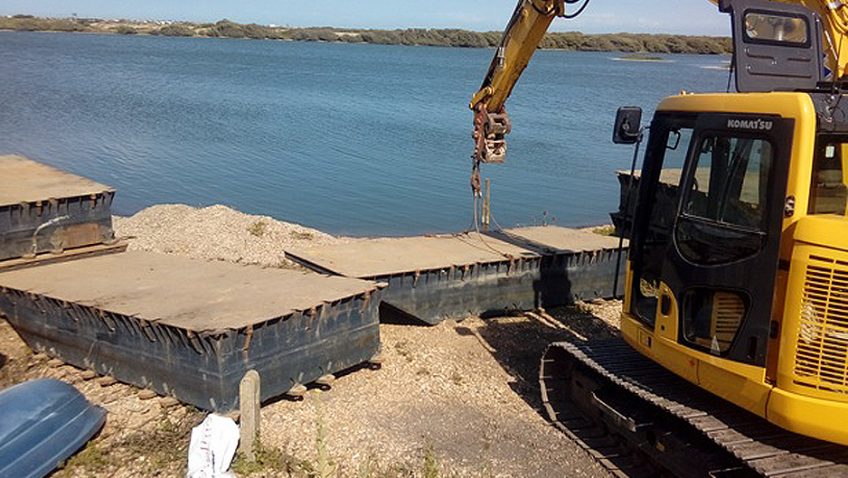 Ambitious works are taking place at RSPB Dungeness this summer to improve the habitat for rare breeding terns, but it seems the birds can’t wait to breed. The improvement works have been planned to entice threatened terns back to breed on Burrowes Pit next spring, but the project has already enjoyed unexpected success as common terns are breeding in the pit for the first time since 2009.

As part of this unique redevelopment project, an excavator has been mounted to a floating pontoon and will be ferried into place across the water to excavate submerged shingle from around the foot of the islands. This material will then be redistributed across the top of islands to raise their heights in accordance with the conservation specifications. Laser leveling has been used to plan the new height of over 46 islands, with RSPB ecologists advising on the specialist nesting requirements for a number of threatened species, including little terns and Mediterranean gulls.

Craig Edwards, Warden says: “As terns breed in colonies and often return to the same sites year on year, the presence of several breeding pairs this year is great sign. We are hopeful that the works will attract common, Sandwich and even little terns back to breed at RSPB Dungeness in future years.”

The complicated works will go ahead as planned, taking care to start far away from the nesting birds while they raise their young. Terns need raised shingle in which to nest, but in previous years the shingle islands have been submerged during breeding season as water levels have risen in the old quarry.

The works have received planning permission and are approved by Natural England. They will be completed by the 31st October, when RSPB Dungeness becomes a haven for tens of thousands of wintering wildfowl. The reserve is open as usual throughout the works, which are visible from the sheltered visitor centre between 10.00am-5.00pm daily.

Funded through money raised from RSPB memberships and visitors to the site, as well as an additional £48,200 donated by Viridor Credits, the work will be the largest investment at RSPB Dungeness for over 13 years. The Whitehead Monckton Charitable Trust have donated a further £3,000 to help pay for a boat, which will enable the reserve team to undertake future habitat management on the islands more easily.

Gareth Williams, Operations Manager at Viridor Credits, which awarded funds towards the creation of the islands, added: “Improving the UK’s biodiversity is a major aim of both Viridor Credits and the Landfill Communities Fund. We are grateful to the RSPB for helping to deliver this aim through the invaluable work they do for our environment.”

RSPB Dungeness was purchased in 1930, making it the oldest existing RSPB reserve, and it was the first RSPB site to employ staff to protect the rare birds nesting there.