Home / LIFESTYLE / REVIEWS > / DVD REVIEWS / Is it romantic or kinky to fall in love with a Doppelganger? 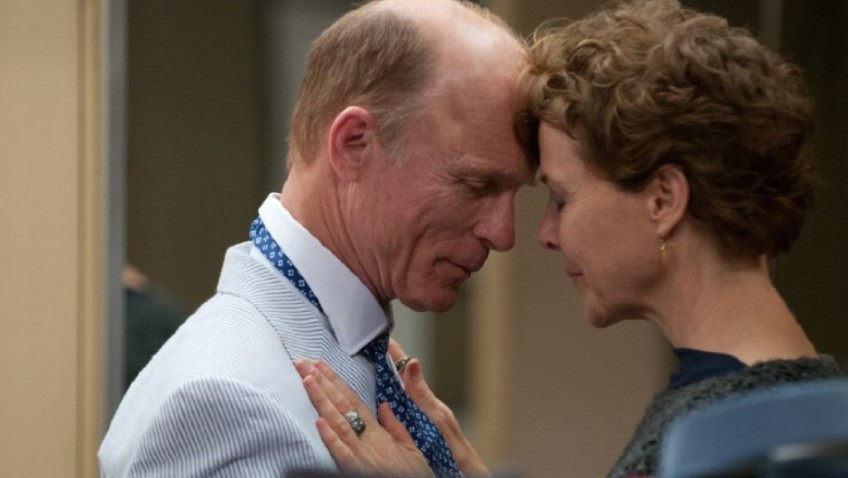 Is it romantic or kinky to fall in love with a Doppelganger?

THE FACE OF LOVE (Signature). Five years after the death of her husband, a grieving 56-year-old woman pursues, dates and seduces a 64-year-old artist (Ed Harris). It isn’t often you actually see mature people having sex on screen. But what will he think when he finds out he looks exactly like her late husband (also played by Ed Harris)? What will her daughter and friends think when they find out? Come to that, what would you think?  Is it all in her imagination or is for real? It’s weird. It’s sick. The film should surely be more mysterious, more surreal, more Gothic, more psychologically disturbing than it is? As it stands it’s just not believable at all.

LAST TANGO IN HALIFAX SERIES 3 (BBC). It’s more of the same. Life is unfair. It’s never easy. People make mistakes. People lie. People deceive. The past catches up and the collateral damage is enormous. “Sometimes you need a bit of madness in your life.”  Men are weak and absurd and the women can’t let go, can they? The series, aimed at female audiences and pensioners, is built on popular, sturdy, Victorian serial lines with something sensational happening at regular intervals. The final episode is hilarious. The strength of the production is the casting: Derek Jacobi, Anne Reid, Susan Lancashire, Nicola Walker, Tony Gardner, Rupert Graves, etc.

STATIONS OF THE CROSS (Arrow). A German teenager (Lea Van Acken), who is about to be confirmed, offers her life to God. She wastes away and dies, convinced she is bad. The film, directed by Dietrich Bruggemannn and entirely dialogue-driven, blames the severe indoctrination (tantamount to abuse) of her mother and her priest who belong to an austere and dogmatic off-shoot of the Roman Catholic Church who deny all earthly pleasures to such an extent that everything she does and thinks becomes a sin. Religious extremism is always disturbing and this provocative story will make many people very angry. It is shot in long, single, static tableaux, one for each of the 14 stations, and all the more emotionally involving for it.

IN ORDER OF DISAPPEARANCE (StudioCanal). Snow-plough driver, a decent citizen, turns vigilante and takes a brutal revenge on the cocaine gang who killed his son, each death marked by a funeral card on screen. This Nordic black comedy thriller gets more and more brutal, more and more tongue-in-cheek, until it has no reality. Stellan Skarsgard plays it absolutely straight. Pal Sverre Hagen, as a lanky, infantile, pony-tailed villain, camps it up. So does Bruno Ganz’s godfather. Hans Petter Moland’s film is flawed but entertaining. The snowy white landscape is a bonus. So, too, are the snide remarks about the Swedish welfare system and their lax prisons.

MAN ABOUT THE HOUSE (StudioCanal). British period melodrama, released in 1947, has potential. Two English spinsters inherit an estate near Naples. Margaret Johnston, as the eldest, a prim iceberg, melts before the charms of the handsome, strapping Italian handyman (Kieron Moore in his debut role). She is so besotted she doesn’t realize he is poisoning her. If only Hitchcock or Chabrol had directed, there would at least have been some tension; but they didn’t and there isn’t.

WALK A TIGHTROPE (Network). Dan Duryea, famed for his villains in Hollywood in the 40’s and 50’s, now no longer young (and, no doubt, in need of work) came to Britain in 1964 (as many American actors did) to make a poor and very cheap B picture very quickly. He is cast as a murderer who, under oath in court, says in his defence that the wife who hired him to kill her husband is just as guilty as he is. The wife denies ever having met him. The silly scenario gets cardboard sets and cardboard acting.