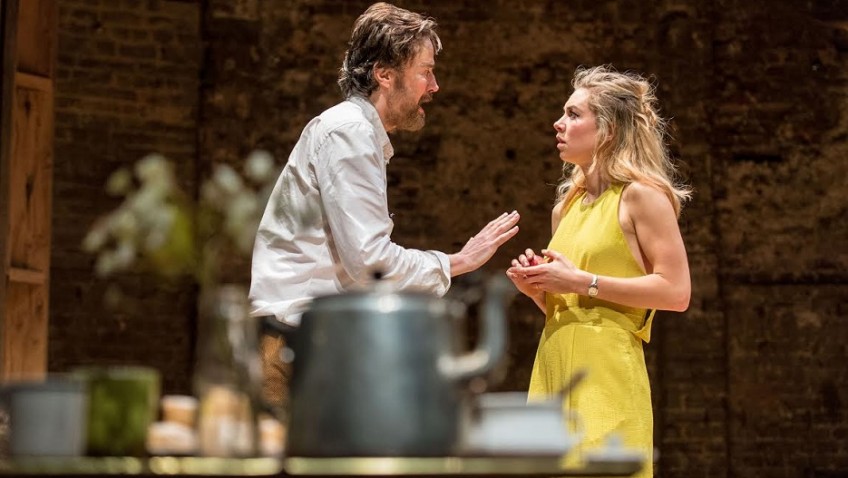 Moscow’s Mossovet State Academic Theatre is here for two weeks with two plays by Anton Chekhov, directed by Andrei Konchalovsky. The plays are acted in Russian. The good news for non-Russian speakers is that there are sur-titles. The bad news is that they are more often than not out of synch with what is being said on stage.

Both productions, acted on the same veranda stage, are notable for their physicality and big emotional performances. When Vanya (Pavel Derevyanko) empties a cupboard frantically looking for a phial he has stolen, he throws out all the documents and there is a snowstorm of paper. Similarly when Waffles (memorably played by Alexander Bobrovsky as an exceptionally large man) is nearly knocked over, the flowers he is carrying all go flying high

Vanya is much younger than usual and is acted much more openly as a comic character; effete and immature, he comes across as more of a city than a country gent.  Another surprise is to discover that Olga is also in love with Vershinin.  Equally unexpected is the affection and tenderness Astrov (Alexander Domogarov) shows he has for Sonia (Yulia Vysotskaya).

There are further surprises. Sonia’s dead mother’s ghost drifts through both plays for no reason. Vanya puts his hand up Irina’s skirt.  Astrov (also played by Domogarov) rips off Elena’s clothes. Soleny attempts to undress Sonia, who climbs on to the piano in an attempt to get away from him.

Old photographs are projected on a screen to set the mood. Astrov’s lecture to Elena on the destruction of the forests is accompanied with a lantern show of grim photographs of what actually happened to the Russian countryside and the communities. But, why, during the scene changes, do we have to have films of modern urban traffic and silly interviews with the cast who comment on the roles they are playing in such a jokey way?

The over-acting, stage-hogging old servant (played by an actress pretending to be old) is a particularly off-putting way to start Uncle Vanya.  Another major disappointment is that the sound of the off-stage military band at the end of Three Sisters, which can make the final moments so unbearably moving, can barely be heard. The newsreel images of marching armies, which blatantly contradict what Chekhov is saying in his last speech, unsubtly tell us what we already know.