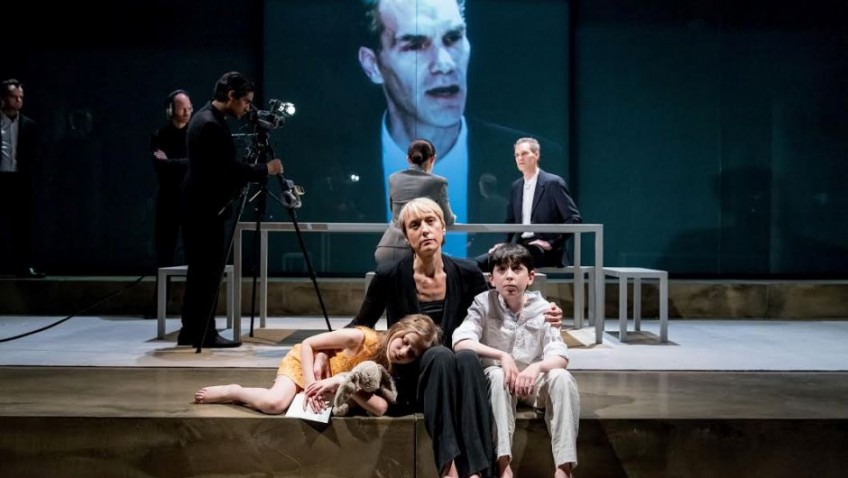 The Greek victory in the Trojan War was dearly bought. Agamemnon, the Greek commander, sacrificed  his daughter, Iphignia, to the goddess Artemis for a favourable wind to take his ships to Troy.

The war lasted ten years. On Agamemnon’s return his wife, Klytemnestra, who had taken a lover during his absence, murdered him. Their son, Orestes, then murdered her, avenging his father’s death.

Aesychlus’s trilogy premiered in 458BC in Athens at the Festival of Dionysos when it won first prize.

There was a memorable mask production of the Oresteia by Peter Hall at The National Theatre in 1981. Audiences came out of the Olivier Theatre feeling they had just been listening to a great piece of music. The translation was by Tony Harrison. The score was by Harrison Birtwistle.

When the ancient Greeks went to the theatre they would already know the story, the myth on which it was based. They would want to see what the dramatist had done with it. Aesychylus, Euripides and Sophocles would come up with their different versions and attach their names to it. The French in modern times – Anouilh, Giraudoux, Sartre – did the same.  The American playwright Eugene O’Neill called his Oresteia Mourning Becomes Electra and set it during the American Civil War

The Oresteia at Almeida Theatre is not Aeschylus’s tragedy but a radical reimaging of the play by Robert Icke.  You may wonder what has happened to the Chorus, the Furies and Klytemnestra’s affair with Aegisthus.

Icke directs his three-and-a-half-hour version and places the emphasis firmly on the domesticity of the Atreus family and to make the sacrifice even more chilling, casts an endearing little girl (Clara Read) as Iphigenia.

The parental anguish is palpable. Icke also gives the play a strong political and media context. Agamemnon and Klytemnestra are interviewed on television. There are excellent performances by Angus Wright and Lia Williams. Jessica Brown Findlay makes her stage debut as Electra.

The Athenian court in the last act tries to establish what actually happened. It is difficult since they are dealing with a traumatized Orestes. Will he be found guilty or not guilty? How would you vote if there were a tie and you had the casting vote?