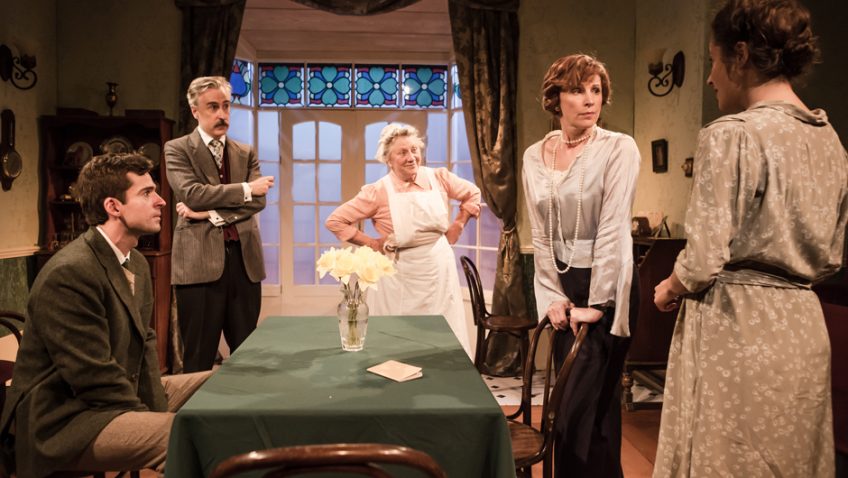 John Galsworthy, a neglected playwright, gets a welcome revival

At the turn of the century John Galsworthy (1867-1933) was one of Britain’s leading playwrights, up there with Bernard Shaw, Harley Granville Barker, Somerset Maugham and St John Hankin. Galsworthy’s plays were famous in their day for their criticism of social injustices: one law for the rich, another law for the poor (The Silver Box, 1906), industrial relations (Strife, 1909), prison reform in relation to solitary confinement (Justice, 1910), landed gentry versus nouveau riche (The Skin Game, 1920) and anti-Semitism in the ruling classes (Loyalties, 1922).

Windows premiered at the Royal Court Theatre in 1922 with a cast which included Herbert Marshall and Ernest Thesiger. Geoffrey Beevers’s revival is the first in 85 years.

An 18-year-old girl smothered her illegitimate baby. She should have been hanged but she got a reprieve and has just been released from prison, having served a two-year sentence.

“I didn’t want to kill the baby,” she says. “I wanted to save it from living.”

Her father, a philosophical window cleaner, persuades a middle class family to employ her as a parlour maid

The head of the house and his daughter, liberal-minded idealists, feel they ought to give the girl a chance. His wife, who hasn’t an ounce of idealism in her, has serious doubts about her. Well, wouldn’t you?

The son, who served in World War 1 and is still suffering from shell-shock, wants to rescue the girl. He identifies with her, thinking what he suffered in the trenches compares to what she suffered, locked in a prison cell.

Mother is convinced that the girl is a minx and has set her sights on her son. Her worst fears are confirmed when the cook catches them in a passionate kiss.

There is nothing to be done with girls like her. The girl doesn’t want to be saved. She wants a life. She will probably end up on the streets.

Galsworthy described Windows as “a comedy for idealists and others” but it isn’t as good as the plays listed above and the actors struggle to make it work.

A play by Galsworthy, which would be worth reviving, is Joy. I saw an excellent production at the Shaw Festival in Niagara-on-the-Lake. It’s a short gentle, wistful, summer piece, which feels like English Chekhov, except that Chekhov hadn’t yet been performed in England in 1907.