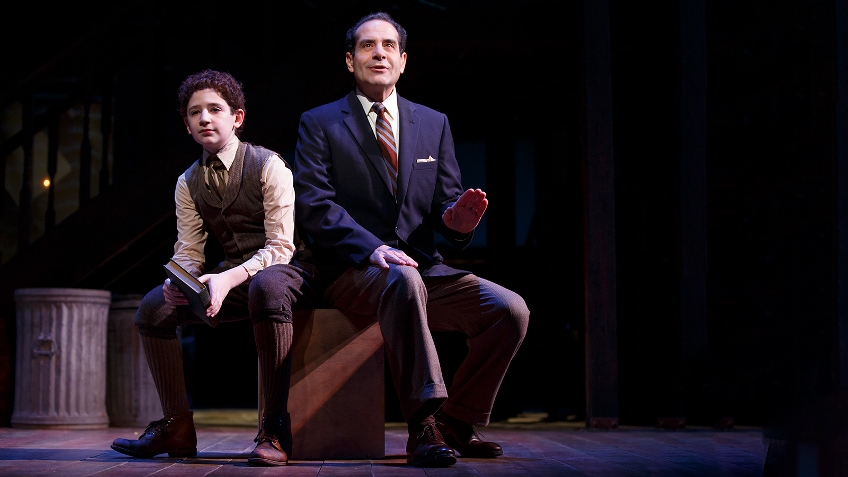 The two plays, both set in the 1930s, and both produced by the Lincoln Center Theatre in 2014, are James Lapine’s comedy about legitimate theatre and Douglas Carter Beane’s comedy about burlesque.

The show must go on! Break a leg!

James Lapine’s Act One, which Lapine also directed, is an adaptation of Moss Hart’s Act One, a classical theatrical memoir, published in 1959, and essential reading for anybody who is interested in show business.

Moss Hart (1904-1961) was the son of impoverished immigrants who lived in the Bronx. He became an office boy to a producer at 15. He dashed off a terrible play which flopped and he was sacked.

He then joined forces with the hugely successful George S Kaufman to write Once in a Lifetime, a satire on Hollywood, which was a smash hit and ran for 406 performances.

They had great difficulty getting the second and third acts right. It took over a year of rewrites and multiple agonising try-outs out of town.

I remember reading the memoir and being, despite knowing the outcome, caught up in the suspense of whether they would succeed. It was like reading a page-turning thriller.

They would go on to write You Can’t Take It with You (1936) and The Man Who Came to Dinner (1939), their masterpiece. All three plays have been successfully revived in the UK

Hart wrote the libretto for Kurt Weill and Ira Gershwin’s Lady in the Dark (1941) and he directed the premiere of Lerner & Loewe’s My Fair Lady (1956).

James Lapine’s affectionate production, acted out on a three-tier revolving set (designed by Beowulf Borritt), has pace and considerable charm.

Douglas Carter Beane’s The Nance, a Lincoln Centre production, premiered on Broadway in 2013 with Nathan Lane. The lead role was specially written for him and allowed him to be both comic and serious.

A nance is an effeminate man, a stock character in burlesque with his limp wrists, risqué innuendoes and blatant double entendres.

American burlesque, ribald and indecent, rowdy and raucous, is a variety performance with comedy sketches and nudes.

Are there fairies in Manhattan? Yes, indeed there are and in large numbers.

The play is set in 1937 when Fiorello La Guardia, Mayor Of New York, was actively cleaning up the city and cracking down on burlesque theatres

Lane plays Chauncy Miles, the nance, who off-stage is a closet homosexual. He is having an affair with a sweet young man (Jonny Orsini) who was starving and smelly when he picked him up in an automat, a regular gay meeting place.

The play alternates between the sleezy theatre where Chauncey is appearing and his home.

The young man actually falls in love with him; but Chauncey wants trade not a serious long-term loving relationship and continues to cruise.

The 1930s was not a good time to be gay. Homosexuality was illegal. Burlesque houses were regularly raided and closed. Gays were liable to be arrested and go to prison and, if they were foreigners, they could be deported.

Chauncy, in a parody of a typical burlesque courtroom scene, becomes a passionate spokesperson for burlesque and the freedom of speech.

Nathan Lane’s high spot is a drag solo act when he is playing an old whore and has a breakdown in the middle of the performance on stage and can’t stop crying. The drag act script is crude-perfect and hilarious.

New York did not legalize homosexuality until 2011.