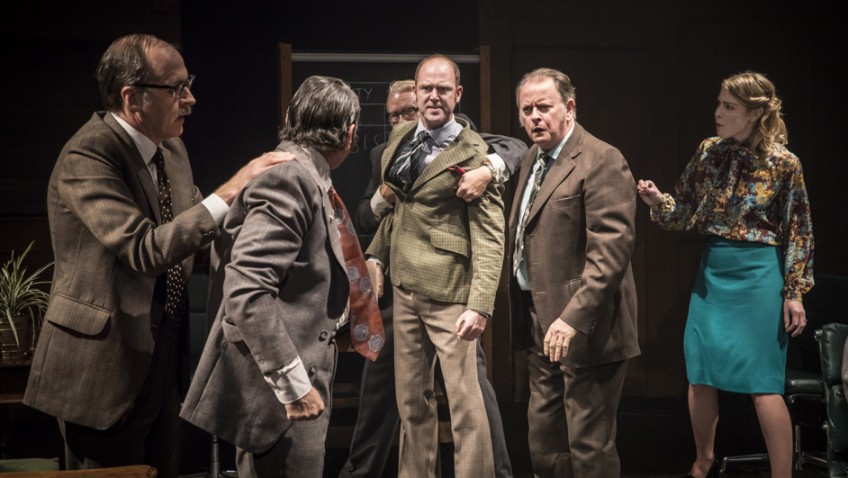 James Graham’s docudrama was first seen at the National Theatre in 2012. Time flies. Was it really that long ago?

Jeremy Herrin’s production is in excellent shape. If you saw it then, you will probably, like me, want to see it again.

This House is a play, which will obviously appeal to people who are politically-minded and want to know what goes on behind closed doors at Westminster; but it can also be enjoyed by people who are not actively involved in politics. Steffan Rhodri and Nathaniel Parker in This House

If you didn’t see it first time round, you are in for a treat. I enjoyed it just as much second time round.

The action begins in 1974 with a hung parliament and ends with Labour’s defeat five years later. With a majority of only three, and then a majority of only one, Labour is liable at any minute to be outvoted on a vote of no confidence and kicked out of office.

The British do what they have always done in such circumstances. They muddle through. Principles, however, can be a dreadful nuisance in a crisis.

Here is Parliament in action. The whips take centre stage.  It all feels pretty authentic: the class war, the bargaining, the pairing, the compromises, the gentlemen’s agreements, the cheating, the swearing and the mace-grabbing hooliganism.

The wheeling and dealing are hugely entertaining. The whips of both parties are under enormous pressure to get members to vote and that means that the sick and even the dying have to be persuaded to turn up.

Graham’s script is very witty and Jeremy Herrin’s fast-moving and constantly amazing production has a wonderful energy and efficiency.

There is a moving moment when one whip behaves with unexpected decency and magnanimity. The rival whips – Steffan Rhodri for Labour and Nathaniel Parker for Tory – are totally convincing.

The National Theatre fields a large and fine ensemble which includes such stalwarts as Phil Daniels, Kevin Doyle, Malcolm Sinclair and Christopher Godwin.