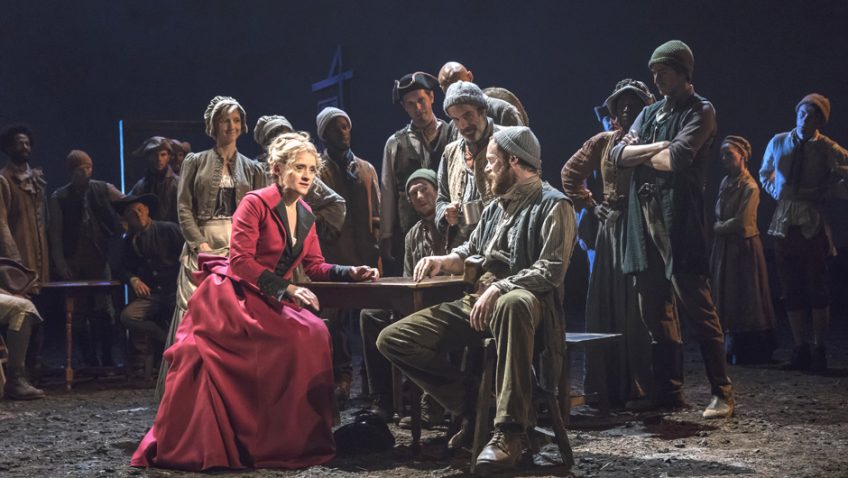 DC Moore’s Common is described as an epic tale of England’s lost land. I have a sneaking suspicion that I might have enjoyed it more had I been watching it in a foreign language I did not know with sur-titles.

Jeremy Herrin’s production, designed by Richard Hudson and lit by Paule Constable, looks good on the vast wide open space which is the Olivier stage. The revolving stage is covered in earth and at the back is a huge cyclorama of sky. The National Theatre can afford hordes of actors to play the peasants and they stride effectively back and forth and often in silhouette. Their mime provides the atmosphere and the spectacle and notably so in the recreation of a “Wicker Man” ritual sacrifices. Anne-Marie Duff is buried alive.

The action takes place at the turn of the 19th century (1809 to be exact) when rich landowners are appropriating public land for their own private benefit. England is in the middle of the Industrial Revolution and numerous Inclosure Acts (pure robbery) are being passed.

The villages are up in arms. The peasants have become cheap labourers and when they complain about low pay the landowners threaten to import Irish labourers who are even cheaper.

Anne-Marie Duff looks good in her red riding dress. She has a lot of monologues and a lot of crude asides to the audience. She plays a woman who has been in London for some time and has returned to her birthplace. She admits she is a whore, a liar and a thief. She is also a con-artist, a fake fortune-teller. Can she persuade her female lover to come with her to America?

The basic problem with Common is its lack of focus. The leading roles are under-characterised and the artificial language they speak doesn’t make it any easier to understand what they are saying or know what is actually going on.

I was not surprised when some members of the audience did not return after the interval.