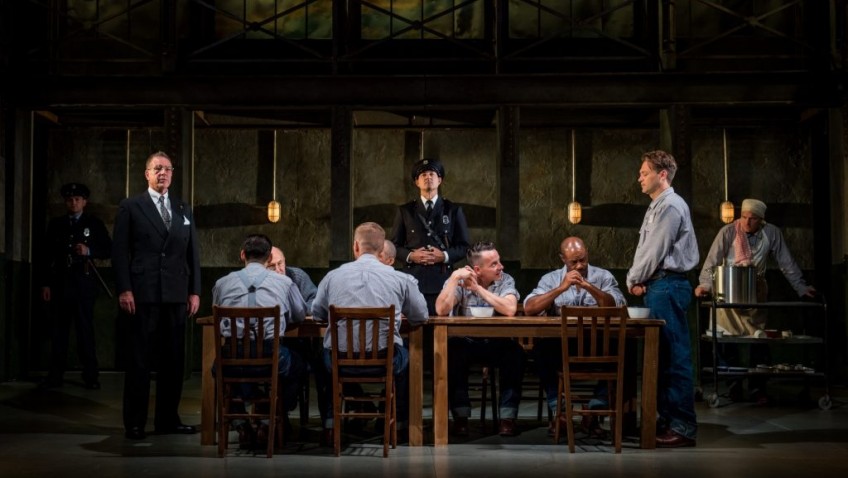 The brotherhood of The Shawshank Redemption

Surprising to many, perhaps, the 1994 film of The Shawshank Redemption tops the worldwide polls for the greatest film ever made. The story was taken from Stephen King’s 1982 novella, inspired by a Tolstoy tale of an innocent man imprisoned, like Shawshank prison’s Andy Dufresne, for murder he didn’t commit. Dave Johns and Owen O’Neill’s stage adaptation of King’s original novella was written in 2009, their latest rewrite in 2013.

The film is, indeed, one that has everything: mystery, intrigue and plot twists; very real, thoroughly endearing characters with great emotional depth; brutality, corruption, abuse, injustice and despair, tempered by hope, humour and the joy of friendship. Presenting all this onstage is a mammoth task, and for performers to enact this gruelling, yet uplifting, story night after night with equal intensity and conviction, is another big ask. Inevitably, its impact falls short of that of the movie – unless, of course, you’ve not seen the movie.

The denim-clad inmate brotherhood of ‘sisters’ is a little stylised into caricature – the dumb one, the stutterer, the black one, the cocky, violent one – and though the humour sometimes comes over nicely, true frissons of menace and fear are lacking, as with the uniformed guards, too. In general, more punch, venom and a more convincing chemistry of interaction are needed to make the whole thing properly crackle and sizzle. That the men don’t visibly age over their twenty years in prison doesn’t help for verisimilitude, either. Some scenes, though, like one when the lights switch off on a scene sexual assault and gang rape, are more haunting.

Paul Nicholls is highly likeable as laid-back, wise, wily main man and free spirit, Andy Dufesne, while Ben Onwukwe does a good job as chirpy Red Redding, the man he befriends, who also acts as narrator for various segments of the story. The narration itself, though, doesn’t quite cope well enough with the intricate plot catch-ups, especially the denouement revelations, which deserve more than just a few sentences in passing. Some of the developments, especially towards the end, certainly deserve more time and space, while the final scene – bright, joyous, hopeful – would certainly be more touching were it not cut quite so short. But we were running late that night!

The play is staged next in Southend