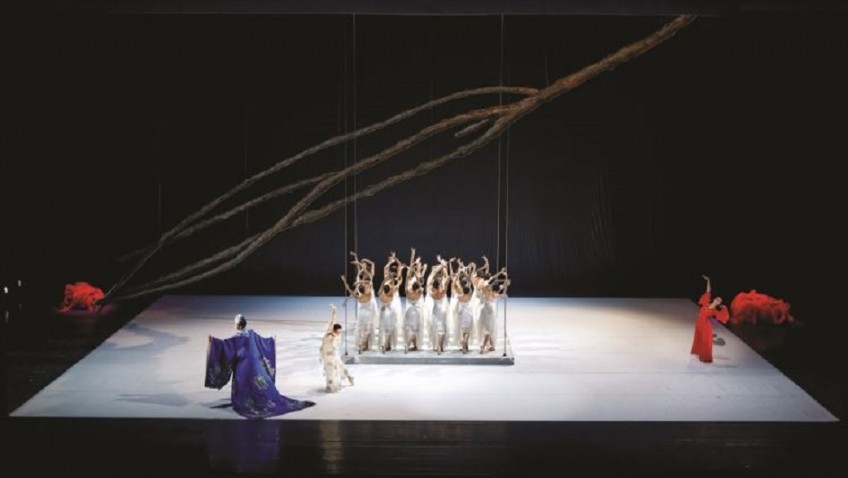 The Movement is a new producing partnership between Sadler’s Wells, Birmingham Hippodrome and The Lowry which has the aim to nurture dance talent and reach and develop new audiences for dance.

National Ballet of China’s London premiere of The Peony Pavilion follows performances at The Lowry in Salford Quays.

The 50 scenes have been made into a two act ballet with six scenes, lasting 1 hour and 55 minutes, including interval.

A rich young woman (Zhu Yan) daydreams about a handsome scholar (Ma Xiaodong). She journeys to Hades (poorly realized) in search of him but the Infernal Judge sends her back to Earth where she discovers her lover has been daydreaming about her.

The young woman has two egos: a flower goddess (Zhang Jian), a scarlet woman, and a delicate, coy opera singer (Jia Pengfei). The latter glides about the stage exquisitely, as if on castors. Ravishingly costumed in silk, she is a delight, a scene-stealer every time she comes on, vocally and physically. The costumes are by Emi Wada

If you want to know more fully what is going on scene by scene then a read of the synopsis might be necessary. But many will be quite happy to look at a series of beautiful images, enhanced by Michael Simon and Han Jiang’s lighting.

I was visually rather than emotionally involved by the production.

The lovely women in the corps, and especially when they are incandescent all in white, arms above their heads, make more impact than the male dancers.

The high spot, dramatically and choreographically is the finale with the cast, costumed in flaming red, circling the stage ever faster and faster and showered with red petals.