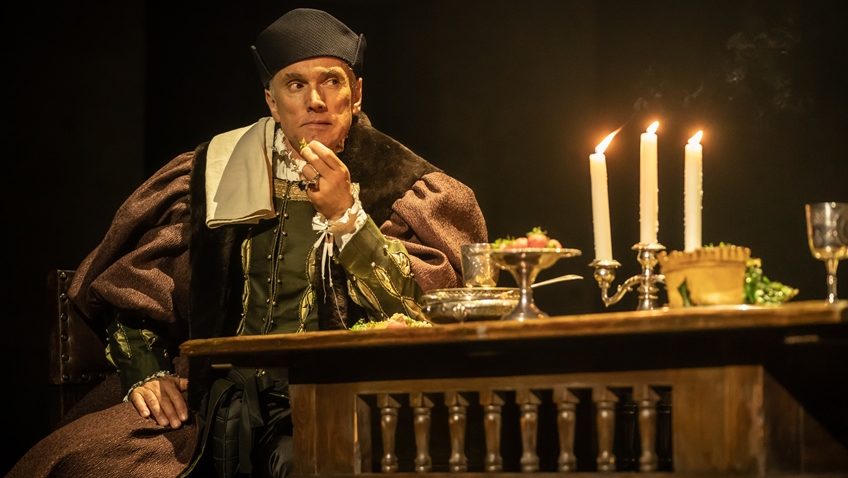 Robert Tanitch reviews The Mirror and The Light at Gielgud Theatre, London

If you are a fan of Hilary Mantel’s multi-awarding-winning Tudor novels, and if you have seen the RSC’s productions of Wolf Hall and Bring Up the Bodies, you will most certainly want to see the final instalment.

Once again Ben Miles is Thomas Cromwell and Nathaniel Parker is King Henry VIII. Jeremy Herrin directs. The adaptation is by Hilary Mantel and Ben Miles.

History plays, with their court intrigues, sex, politics and who will be the next to lose their head, have always been popular with theatregoers. Mantel’s trilogy traces the rise and fall of Cromwell and Henry’s efforts to find the right wife who will give him a male heir.

Thomas Cromwell (1485-1540), mercenary, banker, reformer and arch fixer, has appeared on stage in plays by Shakespeare, Maxwell Anderson and Robert Bolt. But this is the first time he has taken centre stage.

Son of a blacksmith, born in Putney, he was one of the most powerful men in Tudor England, holding many offices. He was Henry’s chief minister and closest advisor from 1532-1549 and was responsible for the legislation that made Henry head of the English church.

His life depends entirely on the king’s trust. He has many enemies at court. Lose that trust and he loses his head. His downfall is brought about by his arranging the king’s marriage to Anne of Cleves. Henry found her physically repulsive.

Ben Miles is far more handsome than Holbein’s portrait of the real Cromwell and a far more sympathetic character than history has made out. Shrewd, intelligent, cold and unemotional, he flatters Henry with the highest compliment: “Your majesty is the only prince. The mirror and the light of other kings.” Nathaniel Parker’s instantly likeable performance dominates the stage whenever he comes on.

Jeremy Herrin’s fluid, fast-paced production is acted by a fine ensemble. There are so many people on stage that it is sometimes difficult to know who they all are. Cardinal Wolsey and Cromwell’s drunken father stalk the stage as ghosts. Nick Woodeson stands out as the most stagy, vicious and obnoxious aristocrat who wants Cromwell, hung, drawn and quartered.