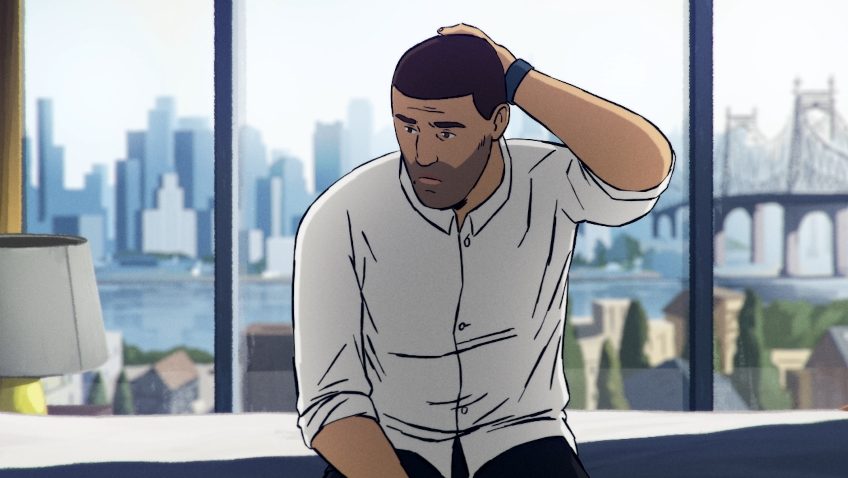 In almost any other film, the fact that we meet the protagonist/narrator when he is a 36-year-old academic contemplating completing a PhD at Princeton, might reduce the tension in the harrowing story he has hidden from everyone – even his husband-to-be – for twenty years. It is no spoiler that Amin Nawabi survives physically, for one survives such a trauma mentally and his name is a pseudonym. Danish Director Jonas Poher Rasmussen is certainly correct that now is the time to hear his friend’s story. Amin’s story will help personalise the news headlines as once again Afghan refugees are forced to flee their homeland and risk their lives to live without fear.

‘What does home mean to you?’ is the first question Rasmussen asks his subject. ‘Somewhere safe where you can stay permanently and don’t have to move on’ is the answer. For many of the most influential years of Amin’s youth he did not have a home. Rasmussen met Amin when they were middle school students together in the same town in Denmark where Amin had sought refuge after, he claimed, the death of his family.

When there is an absence of personal videos and even archival footage; when your past is as distressing as Amin’s, and when there is a need to protect yourself and your loved ones, particularly as some of Amin’s family returned to Afghanistan. Animation is an anonymous, but dramatic way to portray real events and real people. It is more effective than endless talking heads or reconstructions. Rasmussen uses 2D colour animation to convey Amin’s recollections of the facts of their long saga, and more abstract graphic animation to suggest those traumatic events that Amin struggles to recall.

Amin can just about remember a happy life when he was 3 or 4, living in a nice house (there are a few photos and videos of this) in Kabul with his older brother and two sisters, his mother and pilot father. Amin loved dressing up in girls’ clothing and going on the streets where he enjoyed the attention, and recalls being enamoured by Belgium martial arts actor Jean Claude van Damme. But in his Muslim family, no one talked about what this might mean.

At first the civil war was far away and then, with the fall of the monarchy, the American armed Mujahideen arrived and rounded up his father. As he was dragged away, his father gave his mother his wedding ring. The Afghan Army collapsed, and the remaining family only had time to grab a few things. Here Rasmussen brings in archive footage, for Amin’s story blends in with the stories we read in the paper and think of abstractly.

The nightmare continued when they landed in Russia, the only country to grant them a tourist visa. It was a lost year: a year of imprisonment and endless boredom. Crime, corruption, and starvation were rife in Moscow, and overt discrimination against the Afghans made venturing out dangerous. Everyone was on the take and Amin’s family had little money to grease palms.

Amin’s significantly older brother had already moved to Sweden where he worked as a cleaner, saving everything (and losing his girlfriend of ten years) to rent the family a flat in Moscow, and save to pay people traffickers to get them out. In Moscow the family stayed inside their depressing flat watching Mexican soap operas for a year, dreading the knock on the door when their visa expired.

First, the money came for Amin’s two sisters to leave. Amin and his mother waited anxiously in Moscow for the phone call that would signal the girls had arrived safely in Sweden. The astonishing story of why that call was delayed must be heard to be believed.

Here we are brought forward to the filmmaker talking to an animated, adult Amin about why he said his entire family had been killed. It was what he was told to say to the customs officials by a highly paid people trafficker in the airport in his second attempt to flee Moscow for Scandinavia via Tallin. He was also instructed to tear up his passport and use a new name. Amin recalls that after university he had a boyfriend in whom he confided the truth. After an argument the boyfriend threatened to report Amin to the police for lying about his refugee status.

Few people in the audience will be able to imagine the horrific journey on foot to the sea, and the even more unimaginable voyage by sea, when the weak and frail depend on the kindness of strangers to keep the traffickers from shooting them in mercy killings. The effort, the fear, the hunger and sleeplessness will have been worth it if they succeed, but what if they are caught and turned back?

Flee follows Amin and his family in their multiple attempts to reach safety in Europe, harrowing attempts that we have read about in the papers, but from an outsider’s point of view. When told by Amin the unthinkable journey becomes not only real but so engrossing it ceases to matter that the outcome is known.

The film also tells the parallel story of adult Amin dealing with issues of trust, fear and intimacy. Amin has a serious, long-term boyfriend and all the comforts and security of a real home are for once within his grasp if only he can take the leap.

Amin’s sexuality takes an understandable back seat through most of the film, but it is never far beneath the surface particularly as Amin is a Muslim, going through puberty alone, separated from his family even when in Europe. That is why the subplot, so to speak, about his older brother’s efforts to find Amin a wife, has such an unexpected and endearing ending.