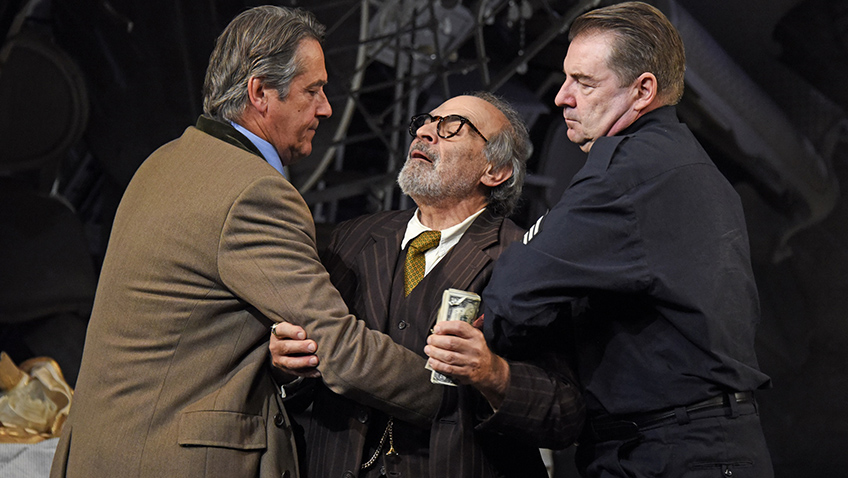 Arthur Miller’s The Price is one of the great plays of the 20th century and deserves to be performed as often as Miller’s other and more famous plays, The Crucible, All My Sons, Death of a Salesman and A View from the Bridge.

The Price is about the lasting effect the American Depression had on one American family; it is something Miller knew about from personal experience as a teenager. 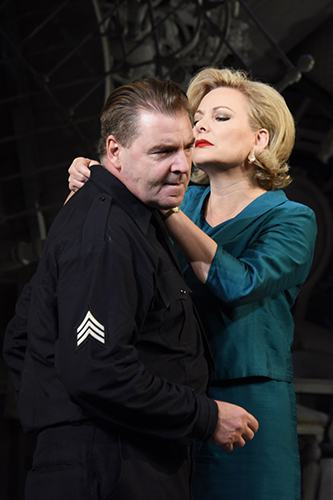 Brendan Coyle and Sara Stewart in The Price

The Price gets a strong production from Jonathan Church and excellent performances from David Suchet, Brendan Coyle, Adrian Lukis and Sara Stewart.

Two middle-aged brothers, who haven’t seen each other for a very long time and are no longer friends, have finally come together to find out what a Jewish second-hand furniture dealer will offer them for the family furniture stored in the attic. The house is about to be demolished.

One brother (Adrian Lukis), ambitious and driven only by money, has never had time for people and is now a doctor, highly successful and rich. The other brother (Brendan Coyle), who sacrificed his ambition to go to university to look after his sick father, a millionaire, who lost all his money in the Wall Street Crash, is a New York cop, a decent man of high morality, who has ended up with nothing.

The brothers confront the past. Is there any chance of reconciliation? Can there be forgiveness? The cop’s bitter wife (Sara Stewart) had always felt that if only the two brothers could meet they could be reconciled; but he regards all attempts by his brother to win back his friendship as manipulation. In a crass effort to make amends, the doctor offers the cop a job for which he has no qualifications whatsoever.

The Price poses a moral question. Which brother did right? Is it the one who stayed at home to look after his father or is it the one who left home and thought only of himself?

Gregory Solomon, the doddery 89-year-old, much married Jewish second-hand furniture dealer, is one of Miller’s favourite characters and the actor playing him has always been in danger of high-jacking the play.

A shrewd bargainer and a born acrobat, Solomon has managed to stay on top. “Nothing ever stopped me. Only life,” he says. David Suchet is hugely entertaining especially when Solomon is refusing to commit himself to the price he is willing to pay for everything in the attic.