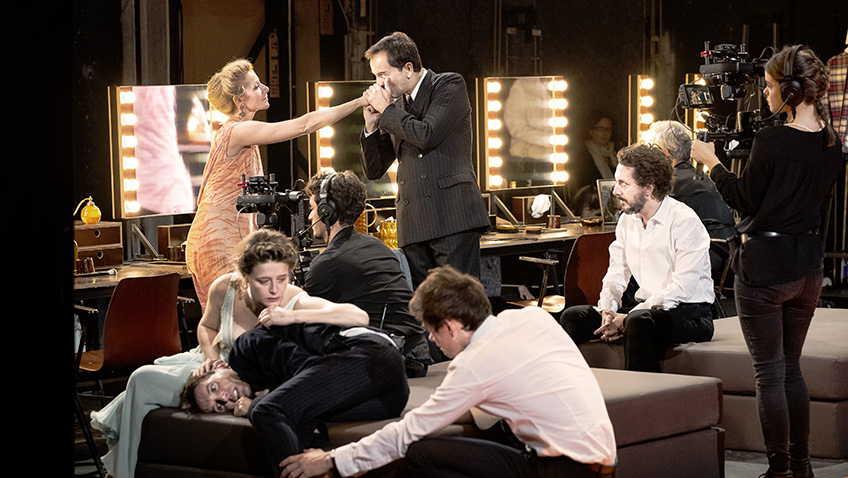 Ivo van Hove was invited by the Comédie-Française to direct them in a play of his own choice. He decided to stage Luchino Visconti’s 1969 film, The Damned. He had already directed stage adaptations of three other Visconti films: Rocco and His Brothers, Ludwig and Obsession.

Hove did not watch the 1969 film again. He worked from the screenplay which records the moral decay of The Third Reich. His brilliant production, a mixture of theatre, film and video, which premiered at Avignon Festival in 2015, is a cautionary tale; and, since the populist extreme right is on the rise everywhere in the world, relevant to today. 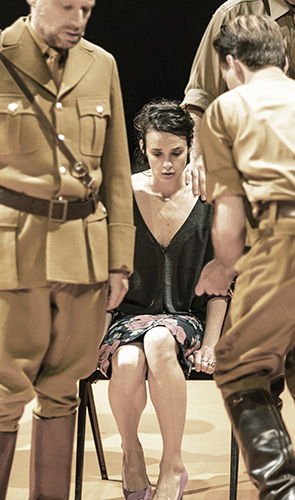 The Damned (Les Damnés) follows a degenerate, greedy, Borgia-like family of top industrialists, who, in order for their business (munitions) to survive, collaborate with the Nazis, a venomous alliance between the economic and the political. The screenplay traces the family’s political and sexual corruption. A nest of vipers is transformed into fascists.

The stage is divided into three areas. Centre stage is a wide and deep empty space with a huge screen at the back. On the left side is the actors’ dressing room. On the right side is a row of coffins.

Hove’s visually arresting production is highly stylized. A cameraman with a handheld camera is on stage all the time filming the carefully positioned actors. The images are reproduced large on the big screen alongside newsreel footage of the burning of the Reichstag, a munitions factory hard at work, the public burning of books (a long list of authors is read out) and Dachau.

Every time a family member is killed there is a funeral rite and the house lights come up. The victim is escorted to a coffin and steps inside. His ashes are poured into a large funeral urn which is at the edge of the stage bang centre. 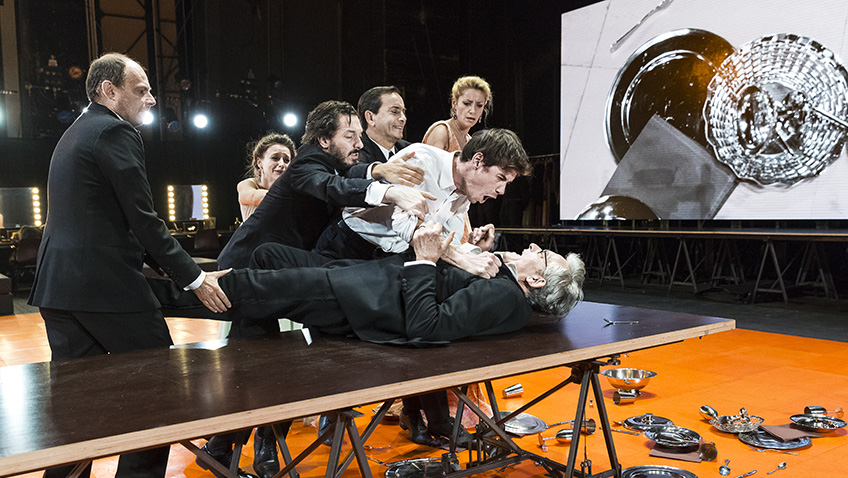 Michael (Christophe Montenez), the youngest member of the industrial family, is a sadistic bisexual and a drug-addicted pederast, who rapes his own mother (Elsa Lepoivre). She prefers her lover to him and wants her lover to be head of the firm.

Lepoivre is observed at one point on video racing through back stage corridors and the public areas of the Barbican looking for her son. She ends up tarred with feathers.

Martin’s paedophilia with a little girl is shocking and uncomfortable to watch. The hushed Barbican audience was no doubt worrying how much the child actress who plays the little girl understood what was actually going on.

The production, a major theatrical event, ends with a naked Martinez washing his whole body in the ashes of his murdered family and then turning his rifle on the audience, gunning us all down.