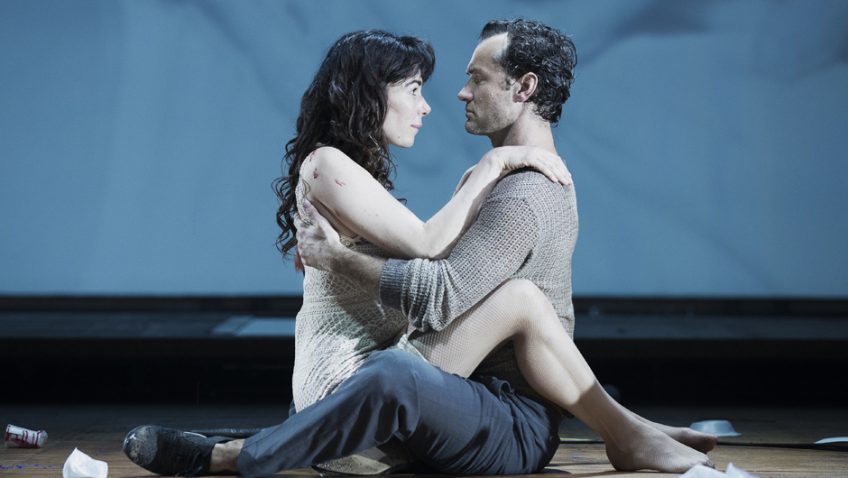 Ivo van Hove, artistic director of Tonnelgroep Amsterdam, has taken up residency at the Barbican.

He follows up his highly praised productions of Shakespeare’s Histories and Romans, Arthur Miller’s View from the Bridge and Ibsen’s Hedda Gabler with a disappointing production based on Luchino Visconti’s famed first film, Obsession, which was based on J M Cain’s 1934 American crime novel, The Postman Always Rings Twice, a term synonymous with sexual duplicity. The story has been filmed many times since, most notably in 1946 with John Garfield and Lana Turner and in 1981 with Jack Nicholson and Jessica Lange.

The present cast is a mixture of Dutch and English actors.

Jude Law plays the drifter who becomes obsessed with a frustrated wife (Halina Reijn) and helps her to murder her husband (Gijs Scholten van Aschat) who runs a roadside cafe.

As you might expect van Hove strips the film down and gets rid of all the Italian neo-realism which made it so distinctive in 1942.

He goes all out for the theatrics and the eroticism. The stage is enormous and largely bare. The soundscape is loud. The actors are liable to burst into song. The dialogue is terribly stilted and desperately needs a dramatist to work on it

The sex scenes are explicit. Law and Reijn strip and have a bath in a tub. An original touch is that the traveller, the drifter meets on the open road, turns out to be gay

Reijn gets to throw bins of rubbish all over the stage. Van Aschat is not so fortunate. He is not only murdered but he personally has to clean up the mess his murder has caused, a double whammy.

A motor engine hangs symbolically above the actors, like the sword of Damacles; but it is the audience who is perturbed that it might crash and crush the actors

The final image has Law standing in front of a filmed seascape of rolling waves.

I think you would be much better off watching Visconti’s film or indeed the two American films.