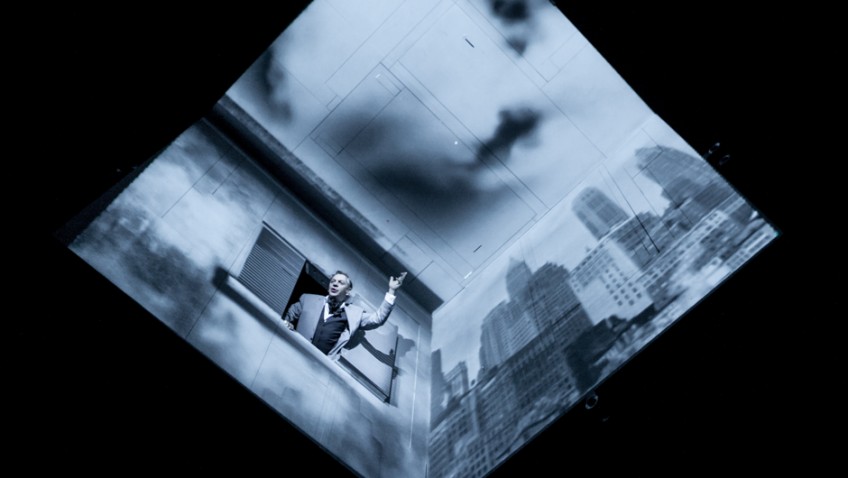 What do Robert Lepage, Jean Cocteau and Miles Davis have in common?

Robert Lepage, Quebecois director, writer, actor and filmmaker, combines physical and visual elements with text and performance. His epic and solo productions have an international audience.

He returns to an impressionistic work which he first created in 1991, following a painful break-up. It was seen at the National Theatre in 1992. The production, taking its cue from M S Escher, has been rewritten and reworked. On the Barbican stage there is a huge tilting cube. It has three walls and three open sides. It rotates all the time. Walls become floors and floors become ceilings. The actors become acrobats.

Needles and Opium explores solitude, drug addiction, disorientation and the creative drive through the stories of three men unhappily in love.

40 years later Robert Lepage, lost-love addict, stays at the same hotel in the same room where they stayed and where previously Jean-Paul Sartre had written his books.

Lepage believes the present version has grown and deepened significantly. Miles Davis who was formerly but a mere shadow, now appears on stage.

There is some welcome dry humour from Labreche when Robert is in a recording studio talking to his American producer and when he is in the hotel talking on the phone to the receptionist at three in the morning, complaining about the very loud orgasms coming from the room next door.

There is a reconstruction of Cocteau’s photo shoot for Life magazine, which is all multiple hands and multiple arms, and quite surreal. There arelongueurs when Cocteau is just talking, partly due to the accent.

The production lasts one hour and thirty five minutes without interval and though it doesn’t always work, it certainly has its theatrical moments.

Technically, the production is amazing. There are video street projections on the cube’s walls and a jazz

soundtrack.  But, as always with Lepage the visuals upstage the words; and this has ever been so and even when he is staging Shakespeare. The cube is the star turn.

I was going to say Needles and Opium began to feel interminable; but forinterminable to have its full impact you really would have to pronounce it in French.